Missoula’s growing population has prompted a greater need for housing, though a lack of supply continues to drive up prices, the Missoula Organization of Realtors said Thursday.

The region’s limited supply of housing continues to play a factor in pricing, causing competition among buyers who now pay close to full asking price. To purchase a median priced home of $315,000, the report suggested, a buyer would need an annual income of $98,000 to qualify.

The current supply of for-sale housing in Missoula represents less than two months worth of inventory, but even that hasn’t affected the pace of construction and permitting. In 2019, the city issued just 459 new housing permits while the county issued fewer than 225.

The decrease in new permits was most notable within the city, which saw few permits for multi-family construction.

“Both 2018 and 2019 were significantly lower than the unit totals we achieved in 2016 and 2017,” said Paul Forsting with Territorial Landworks. “Both years (the city) achieved 775 units. We’ve dropped off in the magnitude of over 300 units over the last couple years.” 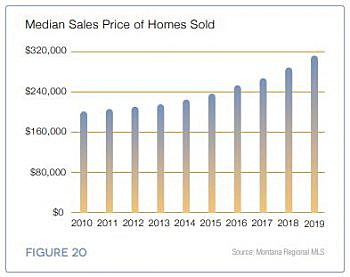 As in years past, the supply of housing units priced at under $350,000 remained in short supply. Buyers paid more than 98% of the asking price in 2019, reflecting a tight supply at a time when demand is growing.

Fewer than 225 homes are currently listed for sale in the entire Missoula market.

“It tells a very different story about what’s going on in the market,” said Wahlberg. “At a lot of price points, more inventory and more listings would be met positively by buyers wanting to buy. It’s a highly competitive market.”

“The trend of high-end, high-dollar condo sales has continued on in Missoula,” Wahlberg said. “The new high-end condos has remained a strong part of new construction in Missoula.”

Breaking the market down by neighborhood, the report found that Mullan Road and the Expressway neighborhoods recorded the highest volume of sales at more than 300 units, followed by central Missoula at around 200 units.

Grant Creek recorded around 50 sales and the Rattlesnake around 80.

“If you combined all the sales that occurred in the Rattlesnake, university area, Slant Streets, downtown and the Northside, that whole area only had 14 more sales than Mullan/Expressway itself,” Wahlberg said. “This is going to be a spot of continued growth in the years ahead.”

Homes that sold in the Mullan/Expressway area hit the $315,000 median price point, while Central Missoula, downtown and the Northside came in below the median price.

Homes sold in other neighborhoods, including Lewis and Clark, Grant and Miller creek, and the Rattlesnake came in well above the median price. The Rattlensake is now the city’s most posh neighborhood.

In comparison, the median price in the downtown and Northside areas was around $225,000, making it Missoula’s most affordable neighborhood.