Rent prices in Missoula increased across all categories in 2019, though the median income of renters grew at a greater percent, according to a new housing report released Thursday.

Still, the city’s vacancy rate in the rental market remained tight and the number of renters burdened by cost remained about the same as in prior years.

“The problem with our low vacancy rates is that it does increase significantly the cost of rent,” said Paul Burow of Professional Property Management. “About everything went up significantly year over year.”

According to the report, released annually by the Missoula Organization of Realtors, the cost of rent in multiplexes, duplexes and houses all increased.

The largest jump came from single-family houses, where renting a 3-bedroom home increased 20% to $1,366 per month. The average rent for an apartment in a multiplex also climbed to $756 for one bedroom and $893 for two bedrooms.

“Our multi-family permits have declined significantly over the last few years,” said Burow. “This creates a lot of vacancy rate pressure. We’re back down to 3.1%, which is right down there with our historically low averages.”

Despite new construction, Missoula’s vacancy rate hasn’t risen above 4.1% in the last five years, putting added pressure on the market and driving prices.

“In our survey of all (Missoula) property managers, they didn’t go and raise rents significantly,” said Burow. “It was between 0 and 5%. What we’re seeing is the evaporation of the low-end, affordable units with new construction coming online.” 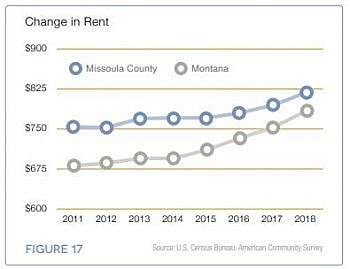 While rent prices climbed, so too did the average income of Missoula’s renters. Figures suggest it jumped 26% over the prior year. But the number of renters who are considered cost burdened, or who pay more than 30% of their income on rent, remained about the same at 49%.

Jim McGrath of the Missoula Housing Authority said affordable housing resources are also under pressure, even as the city places more focus on affordable housing. More than 1,700 people remain on the Section 8 waiting list, though only 774 vouchers are available.

While the city has seen no new units of rent-restricted housing come on the market in each of the last two years – and only 39 units since 2015 – several significant projects are now in the pipeline and could help move the dial, McGrath said.

The Missoula Housing Authority is currently building 12 units for the homeless and will soon break ground on a separate 200 unit facility.

“Down the road from that, in a partnership with Homeword and Blue Line, we’ll be developing 202 affordable housing units, of which 30 will be for the homeless,” McGrath said. “Those two large projects in and of themselves equal about what we’ve done in the past decade. That’s a move in the right direction, and hopefully we can continue that.”

A separate project planned by Housing Solutions will bring 39 units of senior housing to the market.