Bank erosion along at least one stretch of the Clark Fork River will see repairs beginning next week in an effort to shore up the roadway and prevent further damage.

The Montana Department of Transportation announced the project on Thursday relating to roughly one-quarter mile of Old Highway 200 near Marshall Canyon Road.

“The erosion in this area is serious enough that it needs to be addressed immediately to avoid irreparable damage to the bank of the river or the roadway,” said Missoula District Construction Engineer John Schmidt.

MDT said the river experienced heavy runoff in 2019, causing significant erosion between the river and Old MT 200. The $4.6 million project will be funded by federal emergency relief dollars.

Schmidt said crews will remove the existing stabilizing structure and replace it with a new erosion prevention structure. The process includes anchoring a concrete wall to structural supports in the soil. 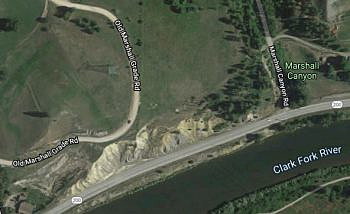 Large stones and vegetation also will be added and portions of the roadway will be replaced. The project will include lane closures and delays of up to 20 minutes, Schmidt said.

That stretch of river is just one where the Clark Fork has cut into the bank, jeopardizing nearby infrastructure. River erosion is set to topple a memorial of Ashlee Patenaude and Taylor Cearley along Highway 200 closer to Missoula.

The two girls were killed by an intoxicated Turah man while walking along the road in 2010. The erosion there also is also moving closer to the roadway.