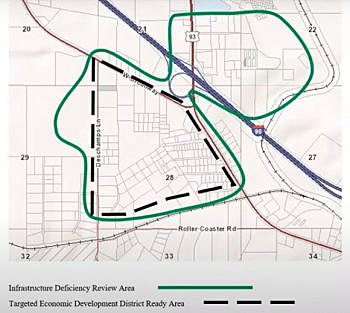 With development interest growing and infrastructure lacking, Missoula County has taken the first step toward creating a new Targeted Economic Development District at the Wye.

Commissioners adopted a resolution declaring an infrastructure deficiency on roughly 600 acres north and south of the Interstate 90 interchange, beginning a process that will result in two hearings later this year that could result in the new district.

“Our goal is to have this completed by the end of the year,” said Dori Brownlow, director of development for the county.

The Targeted Economic Development District would be the county’s first since a similar district was established years ago near Missoula International Airport, followed in 2014 by a district at the Bonner West Log Yard.

Areas around the Wye may be suitable for similar growth and development, though to establish the district, it has to be found lacking infrastructure, according to the county. That could include transportation, water, sewer or broadband, among other deficiencies.

Brownlow said an initial infrastructure review found the area was lacking nearly all of it in various forms.

“Those illustrate the issues out there that would impact the ability to develop,” Brownlow said. “Many other improvements would likely come up once we start studying the area. The statement of infrastructure deficiency doesn’t set forth what the plan would be. If the commission creates the TEDD, a study would be done on how to correct those deficiencies.”

Development interest is already high in the area, which could accommodate future growth. Industrial space is rare in Missoula and with the exception of land at the airport, opportunities to create more industrial space are few.

The lack of designated industrial space has emerged as a potential challenge to economic growth and job creation, officials have said.

The WGM Group is currently working on a subdivision and land development plan for the Wye, primarily west of Deschamps Lane and south of I-90. A portion of that project would fall into the boundary of the new Targeted Economic Development District.

“That would include the industrial area of the property we’re looking to development,” said Jamie Erbacher of WGM. “We realize right now the property is unzoned, so before we move forward and ask to be included in the TEDD, we’d need to zone as well as subdivide the property, and we’re working on that.”

In order to develop, Erbacher said the area will need a proper sewer line. The area west of Deschamps Lane isn’t currently served by city services.

“That would be one deficiency we’d like to see if there’s assistance through the TEDD,” Erbacher said. “That extension could eventually help the area that is designated as a planned neighborhood grow as well. There are some benefits, even outside the TEDD boundary, that could be gained by growing through this process.”

In June, commissioners directed a study of the area and hired consultants to complete the work. The area is generally light industrial or commercial in the county’s land use plan, growth policy and zoning.

Brownlow said the impending study will look at a possible sewer extension to accommodate future development in the area. It will also look at delaying annexation by the city if city services are brought to the area.

“We’re working on a plan to address that, and if the city would agree to delay annexation for a period of time,” Brownlow said. “Our message was, if this is improved, there may be more residential in the area. That would be beneficial if there’s more jobs out here.”