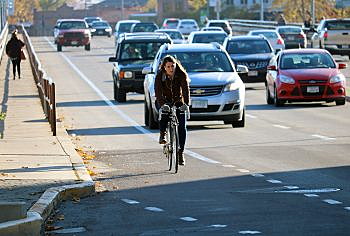 Following a decision by the City Council, Missoula County this week agreed to an even split of the new 2-cent gas tax approved by voters in June.

The fuel tax, which only applies to gasoline and not diesel, went into effect in mid-September and is expected to generate around $1.1 million in revenue annually.

“Two cents is the cap. It cannot go up,” said Chris Lounsbury, the county’s chief administrative officer. “That’s the maximum voters are allowed to impose in the county.”

The city and county recently completed negotiations over how the two jurisdictions will divide the revenue, and they settled on an even 50-50 split. The city is currently the only incorporated entity within the county.

“In the future, if another area incorporates, we will need to revisit this interlocal agreement at that time to include them,” Lounsbury said. “But at this time, because there are only the two taxing authorities, and only one incorporated city, the division is 50% to the county and 50% to the city.”

Missoula County estimates the 2-cent tax will collect around $400,000 annually from tourists. Most of the money will go into a special account dedicated to road construction and maintenance while 1% of the tax will be used to reimburse the retail fuel seller.

City and county officials have said the added revenue will help address the growing backlog of road maintenance and other transportation needs. It will also enable them to apply for more federal grants that require a local match.

The agreement between the city and county allows the county to end the deal at any time.

“The county, as the taxing entity in this case, can end the interlocal without the consent of the city,” Lounsbury said. “If another area incorporates, the county is the one responsible for making sure we have an interlocal (agreement) that would then incorporate distributing funds to that other local entity.”