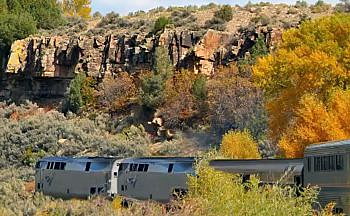 Passenger rail advocates from around the country on Thursday praised the economic value of passenger service, saying it extends economies, improves access to medical care and provides rural America an efficient and economic mode of travel.

The Big Sky Passenger Rail Summit kicked off in Missoula on Thursday, joined by a growing number of counties from across Montana’s southern tier who are now members of a new rail authority intended to restore passenger service.

“When you start talking about passenger rail service, it always becomes a question over how we’re going to pay for it,” said Jim Matthews, CEO of the Rail Passengers Association. “No one asks if your highways make money, or if the national weather service makes money. But when you mention passenger rail service, everyone wants to know if the train is going to make a profit.”

Matthews and other rail advocates, including those from the Southern Rail Commission, Washington State and Boise, Idaho, said the proper question hinges on the economic benefits an investment in passenger rail provides to cities and towns along the route.

Airlines, highways and other transportation modes, including bus service, are subsidized by the taxpayers, advocates said.

“Rail is the economic engine of the heartland. Small towns collect that profit rather than Amtrak, and Amtrak itself acknowledged that,” said Matthews. “It’s not about an individual route making a profit for Amtrak. It’s about the service that’s delivered to the taxpayer for the investment of taxpayer money.”

John-Robert Smith, co-chair and senior policy advisor for Transportation for America, and the former mayor of Meridian, Mississippi, helped spearhead the rise of the Southern Rail Commission.

The commission was the first and only commission of its kind established by Congress and it now covers the states of Louisiana, Mississippi and Alabama. Restoring passenger service was viewed as an economic driver as much as a transportation project.

“We were able to save most of the long-distance routes and turn them back into daily service,” Smith said. “Don’t be drawn into the false choice that it’s either preserving the Empire Builder or restoring new passenger service along the southern part of your state.”

The Southern Rail Commission not only worked to preserve three long-distance trains that served the region, but it successfully lobbied to bring in new service for the first time in over 70 years in the South.

Smith said that rail was added to the FAST Act with highways and transit for the first time in the nation’s history due to the work of the Southern Rail Commission. It created two funding streams, including the Consolidated Rail Infrastructure and Safety Improvements Act, and the Restoration and Enhancement Grant.

“The reason the southern commission has been so successful is because they made their case based on a return on investment,” Smith said. “I think that’s a good model for you with the Big Sky commission.”

Beth Osborne, director of Transportation for America, said passenger rail could see a number of opportunities open in the coming year, including a stimulus package expected in 2021, regardless of the outcome of the presidential race. A new surface transportation bill is also coming, as the current bill is set to expire this month.

“With the leadership of groups like the Southern Rail Commission, we’ve been able to elevate the need and great benefits of rail investment across the country,” Osborne said. “We need to make sure those programs are preserved in the new bill, but it’s also an opportunity to expand and build on them and seek the same budgetary protections for rail funding that we currently have for transit and highway funding.”