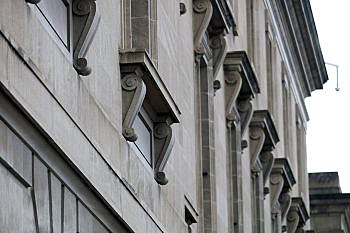 While the city and county of Missoula plan to renovate and occupy the historic federal building in an effort to consolidate services, for now, their employees will remain scattered around downtown Missoula.

With rents climbing, maintaining the status quo will cost a little more money.

Earlier this month, Missoula County approved a new lease agreement for Community and Planning Services, which has occupied the old Radio Central Building in downtown Missoula for the past few years.

The new lease will see the county’s base rent increase from $17.50 per square foot to $20.50. The price does not include parking spaces, though it does come with tenant improvements.

“It’s a fair bit lower than the going rate for other properties here in the downtown area, as well as in the same building,” said Chet Crowser with CAPS. “We’ll be receiving over $88,000 in tenant improvement costs covered by the landlord.”

The federal government listed the mostly vacant federal building as surplus property in early 2020, clearing the way for the city and county to begin due diligence on possibly acquiring the property.

Both governments have long expressed interest in using the building as a hub of government services. Doing so would enable them to consolidate government offices, including Community and Planning Services.

For now, however, the county’s new lease will keep its planning office at Radio Central through at least 2025.

“It timed out well in anticipation of the potential move to the federal building for us to bridge the gap, where we would not have our lease cover a couple of years in-between that transition,” said Crowser. “This will extend our lease from 2023 to 2025 and give us an additional year if we needed it.”

A move into the federal building would make space occupied by the city and county in the downtown district available for other uses, though exactly which properties will depend upon the final consolidation plan.

The city is working on a capital improvements plan that could see other departments move or consolidate as well, freeing up more government-owned properties including Missoula Water and Public Works on West Broadway.

The city has already launched a visioning process for redevelopment opportunities along the West Broadway corridor.

“The plans are all coming together at the same time and could help inform the city’s overall capital improvements plan,” city CAO Dale Bickell recently said. “We’re building our calendar around a June City Council meeting to adopt a resolution.”