Originally opened in 1997, Ear Candy has outlasted the rise of digital downloads that took down multiple chain stores and remains one of the few independently owned record shops within Missoula.

But Ear Candy’s impact on Missoula goes beyond a record shop and actively contributes to the Missoula music scene by sponsoring shows and releasing music by local artists.

The pandemic introduced new challenges to the shop, forcing Ear Candy to completely shut down for two months. As a result, Fleming focused on expanding his website and online presence to sell vinyl on Discogs, a website similar to eBay for those looking to buy and sell vinyl and CDs.

Fleming would often hand-deliver local orders to customers while the storefront was closed. It was a unique change in the business model that allowed him to bring music to customers instead of the other way around.

“I would drive around town every day and deliver records to people,” he said. “Some days it would be ten or fifteen stops, other days it was just a handful, but it was a lot of fun.”

Using a Paychck Protection Loan offered to small businesses during the shutdown, Fleming was able to pay off much of his previous debt. As a result, he was more financially free and was able to expand his business.

“I am one of the fortunate few that actually came out better at the end of the shutdown than a lot of places. I got lucky,” Fleming said. 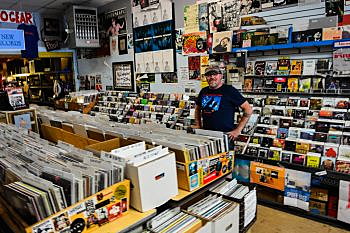 In the process of building the website, Fleming found a niche in selling music online, which he plans to utilize after he retires. But Ear Candy won’t be closing anytime soon, as John just signed a six-year lease to remain in the current location on the corner of Higgins and South 5th Street.

Despite the storefront closing for two months, Ear Candy did not see a drop in sales.

“The biggest surprise I would say is I honestly thought our business would go way down, but it didn’t,” Fleming said. “We had our best year in sales so far it was not even close.”

During the shut-in orders, people began cleaning out their attics and garages and started getting rid of their vinyl collections that Ear Candy could buy and resell, helping the store expand its inventory of used vinyl.

In total, Fleming estimates that business has increased about 50% in both online and retail sales.

Looking to the future, Fleming hopes to keep the storefront open and continue growing his inventory and customer base for the next few years.