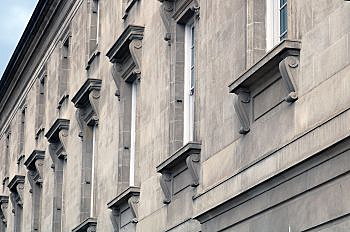 Missoula County could join the city in voting to accept the downtown federal building free of charge from the National Park Service in exchange for promising its long-term maintenance and care.

The move, already approved on a unanimous vote by the City Council’s Administration and Finance Committee, would cost an estimated $30 million up front and roughly $10 million in historic renovation.

But in the end, the county contends, the move would save money, simplify government services and benefit the public with one-stop convenience.

“The city and county have been looking to acquire space to combine services and offices to address both their needs and that of the public,” said county CAO Chris Lounsbury. “The federal building is a good place to do this, and it preserves a historic downtown building.”

The city this week said it will require 55,000 square feet of space to deliver all public services within the coming decade. The county has spatial needs of its own.

By 2023, according to Lounsbury, at least 14 county departments will need additional room, and 19 departments will by 2038. The federal building has the potential to offer around 120,000 square feet of room.

“The city’s needs might the a little more dire right now given the Legislature and the addition of three Municipal Court judges,” Lounsbury said. “But Missoula County does face a space needs challenge.” 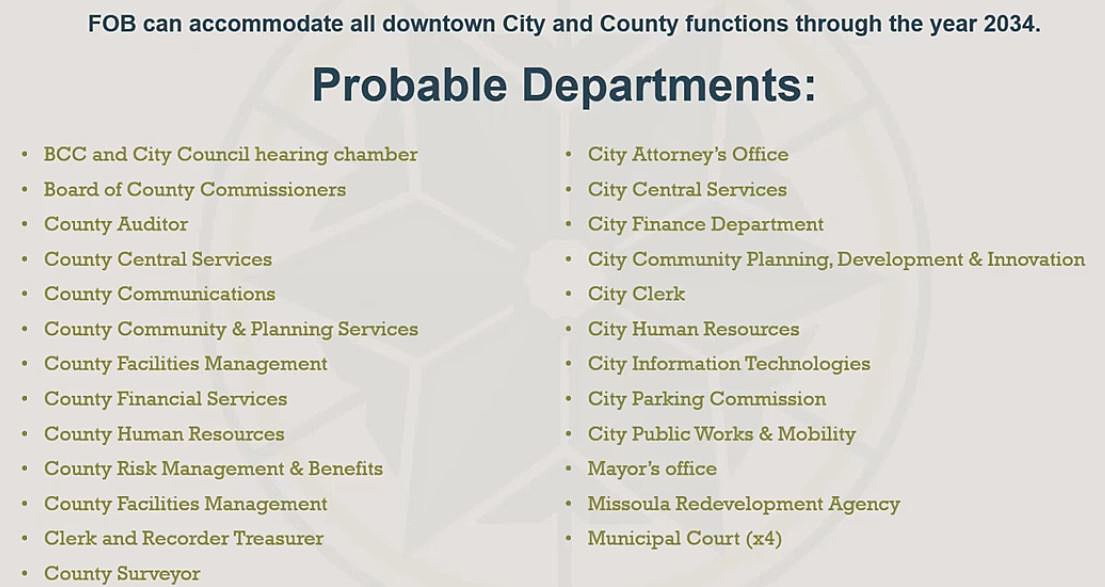 Continuing the status quo and leasing additional space to meet current and future spatial needs will cost the city around $20 million through 2034 and the county roughly the same.

Renovating and expanding City Hall would cost $28 million, while building a new City Hall and County Administration Building would cost around $31 million.

Rehabilitating the federal building would cost $40 million in all, but it would be split 50-50 between the city and county.

Lounsbury said both the city and county could seek federal grants and other funding to help cover the costs. The city also mentioned the possibility of a bond. But both governments also lease downtown office space, and they could redirect that funding.

They also own a number of large downtown properties, which they could sell for redevelopment. That would bring additional benefits, both governments contend.

“All the folks that are currently working at the city and county buildings would still be working downtown,” said Commissioner Josh Slotnick. “What we get on top of that are the new people working at the buildings not yet constructed in the heart of a super-vibrant downtown on top of what is right now City Hall or the (County Administration Building).”

Like other city and county owned properties, the two governments could leverage certain types of development in the sale of their properties. The city has done that on several properties to boost housing needs, though those efforts haven’t been in the downtown district, which would require more upward development.

Still, the county believes it could “pocket zone” its downtown properties if they want to sale.

“I would be anticipating something with multiple stories, commercial, retail, potentially housing, and a whole lot of new economic activity,” Slotnick said. “It would be wonderful to be able to leverage this into housing, specifically housing that’s more attainable, and some retail development.”

Lounsbury said the county currently leases as many as seven downtown office spaces. Consolidating services would bring down cost and create more convenience for the public, he said.

“It would allow us to consolidate both the executive and legislative functions of the city and county into one building,” he said. “But one of the most important benefits is our ability to co-locate vital functions, such as clerk and recorder with city functions that perform those same kind of tasks.”

The City Council’s administration and Finance Committee on Wednesday placed its unanimous approval behind the acquisition and agreement with the county. The City Council will make its final decision on Monday and Missoula County will follow next Thursday.