With the Beartracks Bridge project under construction in downtown Missoula and a stormwater project planned this fall, the Downtown Missoula Partnership hopes to time improvements to Caras Park to the work.

To get there, the organization has privately raised $350,000 over the last two months with a goal of netting $650,000 in total. The funding would be matched by the city and used to launch Phase 1 improvements to the park.

Timing those improvements to the stormwater and bridge projects would save money, advocates believe.

“The work is going to disrupt a portion of Caras Park that’s recommended for modification in the North Riverside Parks and Trails Plan,” said Ellen Buchanan, director of the Missoula Redevelopment Agency. “If we combine the modifications of that portion of Caras with the stormwater project, there’s a cost savings because you’ve got a contractor mobilized down there.”

The city adopted the new Downtown Master Plan in 2019 and followed with an additional plan focused on the north riverside parks and trail system, which includes Caras Park.

Phase 1 improvements include a renovated amphitheater, widening the Clark Fork trail from eight feet to 18 feet, and removing the grass hill. Power upgrades, lighting and a new plaza are also included.

Future phases include an ice ribbon and other amenities.

“The vision that came out of that process is a very ambitious road map in how we’d like to make investments in that area over the next five to 10 to even 20 years, to turn that park into an area that gets a lot of use year-round,” said Buchanan. “Right now it’s basically seasonal.” 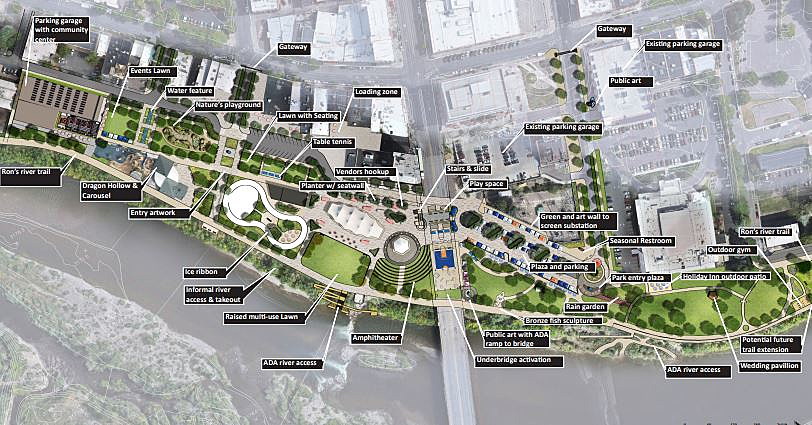 Linda McCarthy, executive director of the Downtown Missoula Partnership, said the organization has quietly raised $350,000 thus far. Bids for Phase 1 came in higher than anticipated at around $1.4 million.

Still, she believes the organization can meet its fundraising goals.

“We feel confident we can get to where we need to go,” she said. “When we’re done with our campaign, we’ll ask the mayor and (Parks and Recreation) to fill that little gap that might be left over. We’ve had good response from a lot of different businesses in the community.”

MRA’s board of commissioners this week approved a $50,000 tax increment financing request from the Downtown Missoula Partnership to help with its fundraising efforts. MRA has invested heavily in the park over the last few decades, though the Front Street Urban Renewal District isn’t yet flush with revenue.

But a number of privately funded additions to the downtown district are expected to hit the tax rolls this year. The city also is awaiting the latest taxable values from the Montana Department of Revenue.

“Front Street is a district that is getting a lot of attention, a lot of requests and has a lot of potential, but not a lot of money,” Buchanan said. “We think that when we get certified taxable values in early August, we should see an increase in TIF revenues, but there’s no guarantees.”

Since last year, the AC Hotel has opened and a number of restaurants in the Missoula Merc are fully open. New townhouses have opened as well and an addition to the Wren Hotel remains under construction.

This week’s $50,000 approval in TIF revenue for Caras Park is contingent upon the funding being available after the taxable values are released. The Downtown Missoula Partnership plans to begin Phase 1 this October, and it’s already eyeing Phase 2 at a later date.

“We’ll continue to work on other future phases including under-bridge improvements, a plaza for the Clark Fork Market, riverfront trails, improved river access, new restrooms and eventually an ice ribbon,” McCarthy said. “We need to create and maintain spaces that provide opportunities for everyone year-round.”