Missoula County is set to adopt its new fiscal year budget early next month, one that holds new spending to around 3.7% over last year and levies only a handful of new mills, one of which is intended to offset the loss of the local option fuel tax.

While the increase in county taxes will be minimal, the overall tax bill paid by property owners will increase more substantially. That’s a result of this year’s assessment by the Montana Department of Revenue, which on average increased countywide property values by an average of 15%.

As a result, the portion of taxes paid by property owners with new county taxes included is set to increase around $152 outside the city and $141 inside the city. 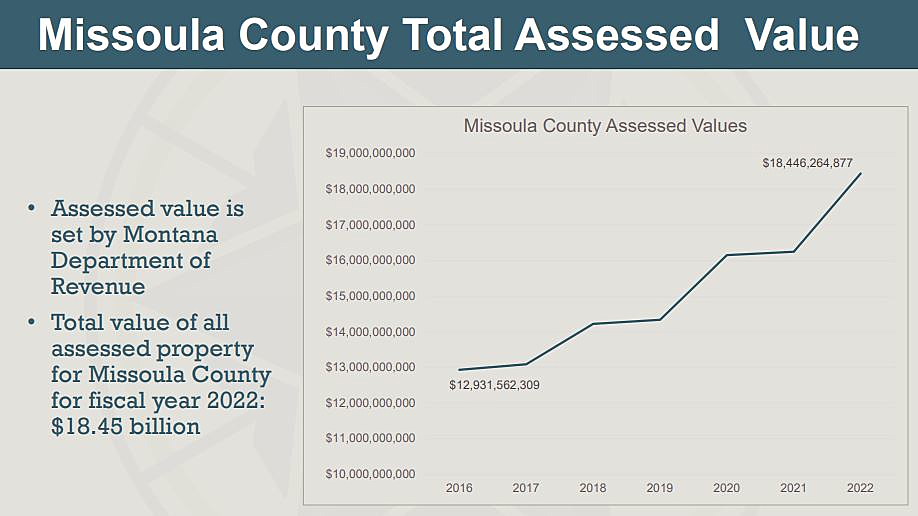 For an average home within city limits, the owner’s share of county taxes make up 19% of his or her tax bill. The city accounts for 28% and schools for more than 32%. Special districts account for 10% and state schools for 10%.

Broken down, this year’s proposed county budget includes $171.3 million in revenue and $173 million in expenditures. The $2.5 million deficit reflects the use of cash savings from prior years for one-time expenditures.

Covid and American Rescue Plan funds aren’t included, but Czorny said those will be discussed in September.

The proposed figures represent a 3.7% increase in expenditures, or around $6.2 million overall. The county suggests that’s needed to sustain service levels, fund around 3.5 new full-time positions and partially replace the loss of the local option fuel tax, which the Legislature revoked earlier this year.

“None of these were frivolous requests,” Strohmaier said. “There’s a lot of needs in the community and a lot of asks from community members for enhanced services. At the end of the day, we simply couldn’t bear that much in the budget.”