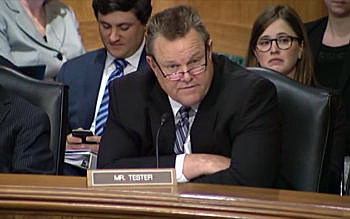 U.S. Senator Jon Tester this week raised concerns over the U.S. Environmental Protection Agency’s proposed cuts to the Superfund program and reports that agency director Scott Pruitt was spending $25,000 to build a soundproof phone booth in his office.

Tester sent a letter to Pruitt asking him to prioritize Superfund cleanup in Montana communities, including those in Columbia Falls, Butte and Anaconda, and questioned the director’s proposed cuts to the program that could run as deep as $326 million.

Last week, Missoula County Commissioners raised similar concerns in a letter to Tester, in which they asked him to resist cuts to the Superfund program.

“Just last week, the independent Office of the Inspector General highlighted EPA’s continued failure to allocate its limited Superfund staff to high-priority areas, such as the West Side Soils Operable Unit in Butte,” Tester wrote in his letter to Pruitt.

“Given your verbal commitment to improving collaboration and cleanup efforts, I expect that you would be dedicating all available resources to cleaning up communities in Montana … instead of wasting taxpayer money on an expensive and silly office perk that should be addressed with a simple door.”

According to the Washington Post, that “silly office perk” includes a $25,000 “privacy booth for the administrator.” The booth would enable Pruitt to communicate privately, though no previous EPA administrator has requested such a setup.

Tester called the project a waste of taxpayer dollars and said the EPA already has a secure room to discuss classified information.

“Given that your agency already has a secure room to discuss work with classified information, this nearly $25,000 expense is frivolous and an embarrassment to taxpayers,” Tester said. “Instead, these resources should be invested in local clean-up efforts.”

“We have prime examples of where the (Superfund) system has helped our community,” said Commissioner Jean Curtiss. “We’ve just gone through a whole period of trying to figure out how to get tax money back into Frenchtown. In order to do that, we’re going to need to get that land back into production, and the only way to do that is to ensure that it’s clean.”

Other Superfund advocates say the funding is needed to continue cleanup efforts along the Clark Fork River. Montana is home to 17 Superfund sites in need of cleanup, Tester said.