In the last 11 years, the two-term Montana senator has walked an increasingly narrow line – backing many critical partisan initiatives while also trying to remain distinct from the national party.

It is a spot that became a lot more difficult to hold on to after President Donald Trump targeted the Montana senator recently for spreading reports, many of them anonymous and some now questioned, about the president’s nominee to head the Department of Veterans Affairs.

President Trump has taken to Twitter and the stump to attack Tester, who is running for reelection this fall. Trump has called on Tester to resign and threatened that “I know things about Tester that I could say, too, and if I said them, he’d never be elected again.”

He’s called the Montanan “a disgrace” and said: 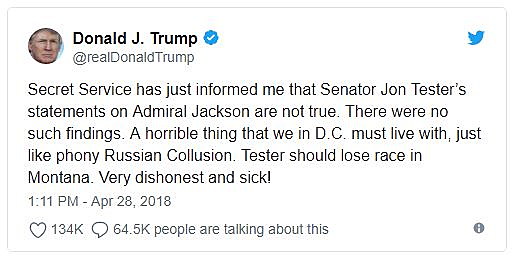 This kind of public battle between politicians has been my bread and butter, first as a journalist for the PBS NewsHour and later as a professor of journalism at the University of Montana here in Tester’s home state.

Tester, the ranking Democrat on the Senate Veterans Affairs Committee, went public with concerns, many of them based on leaked reports, that the nominee to head the Veterans Administration, or VA, Dr. Ronny Jackson, was unfit.

Senate Veterans Affairs Committee Chairman Johnny Isakson of Georgia, a Republican, co-signed a letter with Tester calling on Dr. Jackson to be investigated. But despite the Republican senator’s public support for an investigation, Trump has made this story about Tester.

In doing so, Trump is asking Montana voters to choose between himself and Tester – even as those voters have expressed support for both men. Trump won the state by more than 20 points in 2016 and Tester scored a narrower 3.4 percent victory in his electoral battle against the state’s lone congressman in 2012.

Tester has also taken the lead on issues like reducing red tape in the VA and protecting whistle-blowers who go public with complaints about the agency. It is no small issue in a state where nearly one in 10 residents is a veteran.

Tester is an anomaly in modern American politics – a politician who regularly bucks his party’s leadership, often votes with Republicans and seeks to make politics about the needs of local residents rather than national parties.

It is a line he has had to walk since his unlikely victory over longtime Republican Sen. Conrad Burns, who had been dogged by his connection with a GOP lobbying scandal in 2006. Tester quickly sought the political middle ground.

It is a necessity in a state where only one Democratic presidential candidate has won the state’s three electoral votes in the past 50 years – and that was mainly because of the popularity of outsider Ross Perot in 1992. Perot pulled votes away from GOP candidate President George H.W. Bush, allowing Democrat Bill Clinton to win with only a plurality, not a majority.

Montana is also a state where Democrats have lost more and more statewide races in recent years – including all but the governor’s race in 2016. The governor, Steve Bullock, has also worked hard to carve out a middle ground, working with moderate Republicans in the legislature to pass practical legislation that is seen as fairly moderate.

But even Bullock faced a close race against political newcomer Greg Gianforte, winning a 4-point victory on a message of moderate and pragmatic problem-solving.

For Tester, this has meant trying to position himself between the two partisan extremes. One example of this approach can be seen in a bill Tester has pushed for years on forest management and wilderness.

Tester crafted a bill that made neither side particularly happy. Advocates for more wilderness argued the bill amounted to mandatory logging in national forests. Some logging lobbyists said the bill would set aside huge swaths of land for wilderness status without any clear plan to increase harvesting of forests.

As Tester described it, the bill was “a well-thought-out, grassroots, made-in-Montana solution to issues in the forest.”

That is how Tester has positioned himself throughout his tenure in office. If you need more evidence, watch his first campaign ad this year:

It is an artful presentation of the modern political moderate. The ad features the 13 bills President Trump has signed into law that were sponsored by Tester. It could be a Republican ad. But it isn’t, and it does not stop with the presentation of Tester’s close association with the president.

After first responders, veterans and others list seven of the senator’s achievements, Tester appears, holding up seven fingers and saying, “Eight. And I’m out of fingers!” It’s a moment that works for a couple of reasons.

First, he is a Democrat who has worked with President Trump on multiple issues. And second, he’s out of fingers because Tester lost three to a meat grinder when he was nine years old. Tester is not some polished politician, but a sort of everyman, working the farm now and having worked since he was a boy.

In that moment, the uniqueness of Jon Tester comes through clearly to the Montana voters. Here is a guy who is not a Washington, D.C. politician. He has been sure to maintain his family’s organic farm in rural Big Sandy even as he travels back and forth to Washington. He has carefully crafted the persona of a moderate who will stand up for everyday Montanans, a regular guy with a flattop haircut and a sense of Montana values.

It’s one even his opponents seem to admit holds sway, primarily because they spend a lot of their time and energy fighting it.

One potential opponent – if he wins the Republican primary – is Troy Downing. Downing has an ad where he accuses Tester of being not a real farmer but actually a music teacher. Others have stressed the need to have strong local support to take on Tester, who has out-raised all of his opponents.

The dust-up with President Trump is a moment of uncertainty out here in Montana, though. Is this when Tester becomes a national Democrat and therefore less electable here in an increasingly red state? Can Republicans finally get more traction with their argument that Tester is really a typical Democrat in a Republican state? Or will Tester’s focus on pushing the VA to be better be the primary thing to stick in the minds of Montanans?

For all the tweets and statements, none have come from the top Republicans in Montana. Sen. Steve Daines, Rep. Greg Gianforte and Attorney General Tim Fox – a likely gubernatorial candidate in 2020 – have so far stayed out of the debate. Their silence may be the most telling reaction so far.

Lee Banville is an associate professor of journalism at the University of Montana. This article originally appeared on The Conversation.