Over the past few months as candidates for Missoula City Council detailed their platforms and lobbied for votes, most have adhered to their philosophical views across a range of issues.

But in his campaign to cut taxes by reducing city spending and services, Ward 2 candidate Brent Sperry this week suggested city government was bloated with unnecessary employees, and he cited figures to support his claim.

“In the 2020 budget, they have over 30 employees that were asked for that’s going to add another $2.8 million to the budget,” he said during a forum hosted by the Missoula Downtown Association. “Just in the last 5 years, we’ve added 78 employees, not including the water company, and our population has only grown by 4,000.”

According to the city, that statement is both inaccurate and misleading.

In figures provided to the Missoula Current, the city added 28.49 employees in the Fiscal Year 2020 budget at a cost of $1.72 million. Over the past five years, it has added 69.53 employees, many funded by rates and fees rather than tax revenue.

“Growth in city employees is not just a function of population growth of the city,” said Ginny Merriam, the city’s communications director. “ In the past five years, we have added services and enhanced some existing services in response to residents’ requests.”

Those additions and enhancements include the storm water utility, created to comply with state and federal requirements. This year, the City Council approved five employees under water and wastewater utilities at a cost of $395,801.

It also added two employees at the Office of Housing and Community Development. They include a grants administrator at $28,564 and an energy conservation program specialist at $50,934.

“The Office of Housing and Community Development came about when residents and city leadership saw the need for strong housing policy and administration as the city grew,” Merriam said. “Last year’s citizen survey found that two of the top concerns for residents were streets and housing.”

As for streets, the city this year added 6.6 positions dedicated to Public Works, including four personnel for street maintenance at a cost of $301,020. Three new police officers were also budgeted at a cost of $166,893.

The chart below includes a breakdown of new positions added in the FY 2020 budget and the costs associated with them.  The data was provided by the City of Missoula upon request. 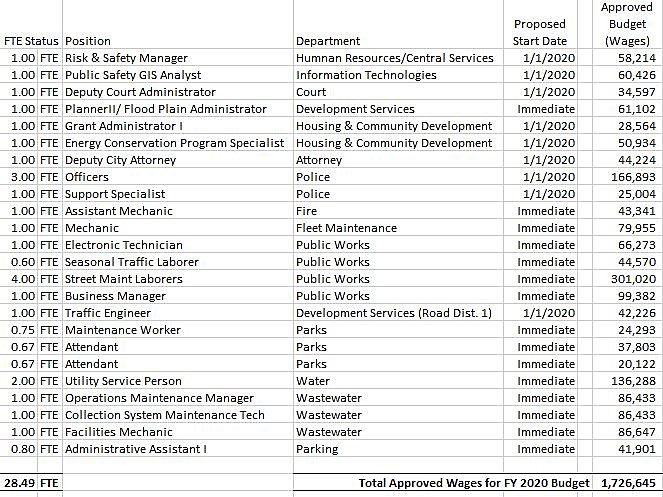