Two weeks after buying a generator to heat their weathered tent in a camp below the Reserve Street Bridge, a homeless couple received something of a holiday surprise: keys to a room with a palatial view.

Bear Legault and Stacey Barnett moved into their room in the Palace Apartments in downtown Missoula on Monday. It marked the first time they’ll have lived in proper accommodations since arriving in Missoula over the summer.

“God answered our prayers when it came down to it,” said Legault, studying his new kitchen. “I was so ready for this.”

Legault and Barnett arrived in Missoula on separate paths and were living among an estimated dozen or so residents in the homeless camp below the Reserve Street Bridge until Monday.

Having given up on housing, the couple intended to stay in the camp and were making accommodations to do so. They bought a generator, two small heaters, and found a free mattress to keep them off the frozen ground.

He hauled water and fuel. She kept the camp as clean as possible.

While Barnett had a Section 8 housing voucher, she hadn’t found a place that would accept them and their two service dogs. They were hesitant to squander money on the application fees, given their $700 monthly income.

But their luck changed when Elizabeth Marshall, property manager at the Palace for the Missoula Housing Authority, called after an apartment opened unexpectedly and encouraged them to apply.

“They passed their screening process,” said Marshall. “I handed them the keys and said, ‘Welcome home.’ ”

Union Gospel Missoula paid the $30 application fee, while a Florence church helped the couple move their items from the camp to downtown Missoula. The process from application to move-in took around 12 days.

They had to wait three of those days after learning they’d been approved as tenants.

“I have been driving him (Legault) nuts for the last few days,” said Barnett. “We found out Friday we were moving in. Ever since I found out it was a go and I was moving in, I was packing my stuff out of the tent and everything’s been packed pretty much the whole weekend. I was ready to go. Last night (Sunday), I had a hard time sleeping.”

Their new one-room apartment on the third floor is large compared to the confines of the tattered tent, and it offers pleasant views of downtown. It’s also warm and protected, comes with an electric stove, a refrigerator and running water.

They can shower as desired, check their mail without having to cross town, and tend to their service dogs in the warmth of radiant heat. Legault doesn’t need to haul jugs of water across the bridge. Barnett can navigate the apartment without the use of her walker.

These are the little things they look forward to most.

“I don’t have to pack ice home every day in my backpack and carry three or four gallons of water on my back,” said Legault. “I don’t have to wash dishes in the candlelight.” 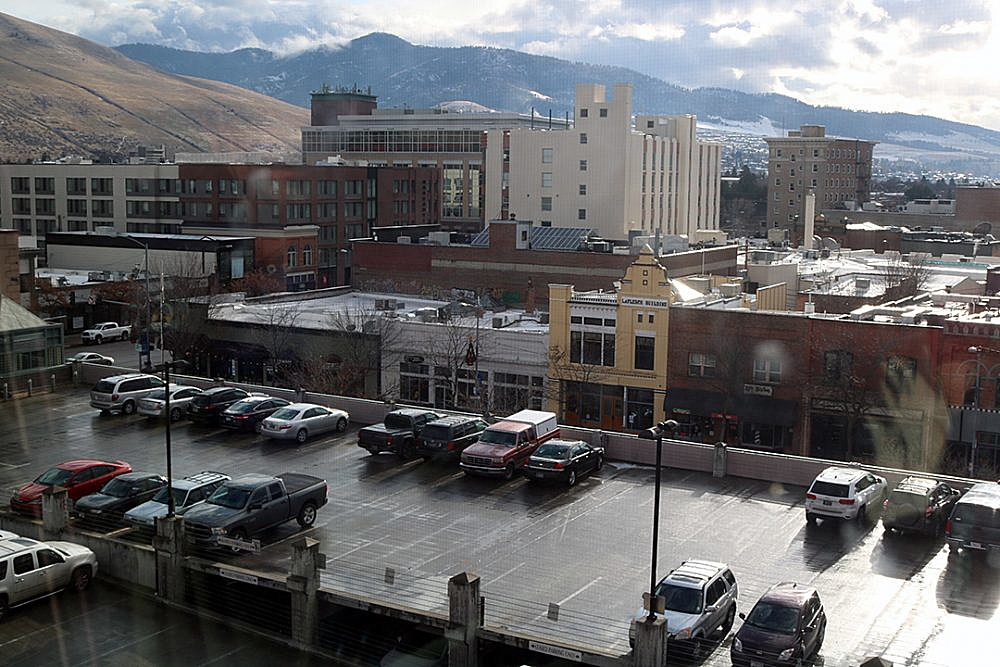 This Thanksgiving, they plan to cook a feast with all the trimmings in the comfort of their new kitchen. They’ve invited one of their former neighbors in the homeless camp over for dinner.

Life is beginning to look a little more typical.

“It means if we want to go to the mall and walk around, we can do that without feeling like we’ll lose our stuff in the camp,” said Legault.

That was a fear in the camp, as some occupants couldn’t be trusted. The camp also has seen its share of crime in recent years, and “safety” is a word Barnett uses to describe the comfort of her new apartment.

The couple’s history is spotted with challenges and missteps, which they both admit but don’t detail. Legault originated in New York. Barnett comes from California, where she and her former husband owned a mobile home before she left due to domestic violence.

The two first met in Colorado and reconnected in Missoula. They made ends meet on Legault’s $700 monthly check from Social Security. Barnett’s Section 8 voucher came in handy as well, though it took a little longer to set it to use.

“We’re trying to leave our homelessness behind us,” said Barnett. “We sold our generator and sold our tent, and gave away the bed we had. We wanted to leave it behind. That way, we can start totally fresh and get that out of our head.”

The Palace, a former hotel, includes 60 units ranging from two bedrooms to studios. Most of the one bedrooms rent for around $590 a month, though prices could be less based upon income.

Each unit is tied to a maximum percent of area median income.

“We have caps as our way of making sure this really nice housing only brings in folks at lower income levels,” said Marshall. “I pretty much only lease up unhoused folks here.”

The city has noted its lack of housing for both the homeless and those at the bottom end of the income bracket, and is taking steps to address it.