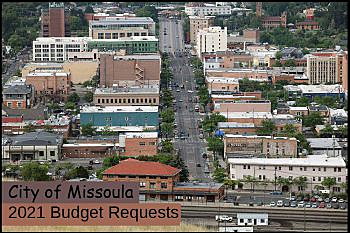 While department heads continue to present their Fiscal Year ’21 budget requests, the Missoula City Council has set aside four long Mondays to hear public comment before moving toward final adoption.

The city also expects to get this year’s financial figures in from the Montana Department of Revenue next week, which could hold implication for many of the items requested for the final budget.

The Department of Parks and Recreation was the latest to step to the plate and present its budget requests this week. As one of the city’s largest departments, the requests covered a range of needs, from trail maintenance and expansion to infrastructure work.

Most of this year’s requests focus on health, equity, environmental quality and inclusion, according to Director Donna Guakler.

“We are trying to align ourselves better with all the City Council adopted plans, acknowledge the trends that exist, including those caused by the pandemic, and prepare ourselves to address the challenges and opportunities before us,” Guakler said.

The department’s budget currently sits at around $7.4 million, though it’s seeking at least $538,000 for a range of needs, from new positions to a water truck. Funding to cover annual increases related to union contracts is also being sought.

“We’re anticipating approximately a 4% increase, without any new requests, which is based on those baseline things like contractual wage increase, some equity wage increases and a bit of restructuring,” Guakler said.

Over the next fiscal year, the department looks to tackle ongoing reforestation efforts, and it’s seeking $1.2 million to complete the removal of Rattlesnake Dam. It also is seeking $175,000 to improve access and restoration of the Clark Fork River bank in the urban core, and it wants to implement a conservation and stewardship mill levy, which the City Council approved last year.

Guakler said those projects were approved by the City Council but only a portion of the funds were set aside last year to do the work. The department is seeking the remaining balance this next fiscal year.

Parks and Rec also is seeking funding for trail work, including an extension of the Milwaukee Trail. That could see some funding taken from the Open Space Bond to secure the right of way to make the extension possible.

Funding is also being sought to make improvements in conjunction with the Mullan BUILD project and future plans for Higgins Avenue.

“Higgins presents an incredible opportunity that could provide for access, for green space, for engagement, and for increasing the capacity in year-round use,” Gaukler said. “It’s about walk-ability, bike-ability and the delivery of services.”

Other funding requests include $930,000 for pavement preservation, $50,000 to stabilize the river bank near Osprey Stadium, and $250,000 to increase the capacity of commuter trails. The latter could also see funding come from the Open Space Bond approved by voters in 2018.

“The Milwaukee Trail from the Hellgate river bowl to the Tool Park area receives as much bicycle and pedestrian traffic as Fifth or Sixth (street) does when the university is in session,” Gaukler said. “We need to widen some of these downtown trails.”

Other funding requests would go to improve the department’s efficiency and generate more revenue, such as a new slide feature at Splash Montana, which the department believes would draw more paying customers.