Montana raced past its 1,000th coronavirus case on Wednesday, hitting a milestone that didn’t seem possible when the economy reopened in April and five days passed in May without any new cases.

But the 50 new COVID-19 cases reported on Wednesday marked the second highest number since the pandemic began – second only to Monday’s count of 56 new cases, which prompted calls for mandatory face masks in public in Missoula.

The past three days have surpassed even the highest daily count recorded on March 26, when 35 new cases were recorded during what was expected to be the height of the pandemic. That would now seem like a good day in Montana given recent trends.

Missoula County is also on an upward trajectory and recorded three new cases on Wednesday, with all three patients being male, including a child under the age of 9. County health officials are dealing with 50 active cases and nearly 300 close contacts, meaning there are nearly 350 patients who require ongoing medical support from health experts.

On Tuesday night, state Rep. Theresa Manzella, R-Hamilton, hosted a “Constitution Alive” class, which drew 40 people according to her Facebook page. Images of the class shows groups of people sitting at tables with no masks or social distancing. 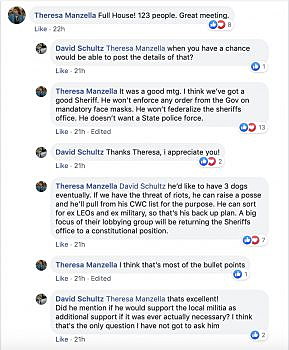 “I was a good mtg,” Manzella wrote on Facebook. “I think we’ve got a good Sheriff. He won’t enforce any order from the Gov on mandatory face masks. He won’t federalize the sheriff’s office. He doesn’t want a State police force.”

While Manzella eschews face masks, other leaders and health officials have grown concerned over the spike in cases this past week. Missoula County commissioners and the local health officer are exploring regulations that could permit them to implement a mandatory face mask rule in the county.

Commissioners are expected to continue discussing the issue on Thursday when they join Missoula Mayor John Engen in calling on Health Officer Ellen Leahy to issue an order requiring masks, at least in businesses that are licensed by the City-County Health Department or the city of Missoula.

“As COVID-19 cases continue to surge in Missoula County and data suggests that masks are among the measures that can limit spread of the virus, this step seems reasonable and timely,” a letter to be considered by commissioners states.

“And while an ordinance requiring face coverings is an option for local government, a health order allows for enforcement through licensure in businesses accustomed to enforcing health standards to operate.”

Commissioners will also ask the health officer to call a special meeting of the health board, which wasn’t scheduled to convene until later in July. The letter has already been signed by Engen and commissioners will consider adding their support as well.

“Such an order has our strong support, along with that of what I believe to be a strong majority of the Missoula City Council, Missoula County commissioners, businesses and residents.” the letter signed by Engen notes. “Because we know you’re inclined to pursue this action, we wanted to formalize our support through this letter and strongly encourage haste in putting the order in place.”