Two candidates running for the highest office in Missoula declined to discuss their platform and answer unscripted questions last week on how they’d approach issues as the city’s mayor.

This year’s race includes four candidates, including the incumbent John Engen and challenger Shawn Knopp. Both participated in unscripted interviews with the Missoula Current and added detail to their platform and approach to the job.

But the other two candidates, Jacob Elder and Greg Strandberg declined to participate, leaving voters with little information beyond the candidates’ own op-eds and social media posts. They are the first mayoral candidates in recent memory to decline a live and unscripted telephone interview with the Missoula media.

Elder asked for more information regarding the interview process and was told it would cover a range of issues including “the candidate’s politics, platform and other issues.”

“Thanks for the opportunity,” he said in the end. “However, our campaign is uninterested.”

What’s known about the candidates is sparse and has been left to social media and the vague promises included in their posts. Strandberg has sought public office in nearly every election dating back to at least 2014, when he lost the Democratic primary for House District 98, according to Battlopedia.

In 2016, he lost the Democratic primary against Marilyn Ryan for House District 99 in Missoula, and in 2018, he ran unsuccessfully as the Green Party candidate for Senate District 49 in Missoula. He also has run for City Council on several occasions and is now vying for a shot as the city’s mayor.

Strandberg, 39, has railed against city spending for years and is running on a platform of fiscal responsibility. He currently runs a blog and has authored dozens of science fiction books.

Elder is a newcomer to local politics, and his campaign started out strong and early. It also has come under criticism for making vague promises, providing little detail, and for blocking members of the public from Elder’s social media platforms.

While Knopp and Engen answered questions related to their critics, Elder declined a similar interview.

“It’s super fun to see mayoral candidate Jacob Elder using the extremely absurd campaign strategy of blocking hundreds of potential voters and future constituents from his social media platforms,” said Kristi Govertsen. “These aren’t obnoxious internet trolls he’s blocking. These are engaged citizens, community leaders, bridge-builders, and longtime Missoulians that are genuinely curious about him, his platform, and how they might work together should he get elected.”

Elder is a Liberian refugee and former U.S. Marine who’s running “to ensure that all Missoulians are given an equal opportunity to succeed in life.” His campaign page mentions housing, affordable childcare and fiscal responsibility.

However, it doesn’t give specific details on how he’d approach such issues, or what he’d cut or trim to achieve “fiscal responsibility” and create new housing and childcare opportunities.

Elder’s latest campaign finance report, filed on July 30, showed that his campaign had $11,333 in its account and had spent $1,999 during the latest filing period. Expenses include $239 at Allegra Printing in Missoula for bumper stickers and $1,655 at Pit Printers of Butte for yard signs. 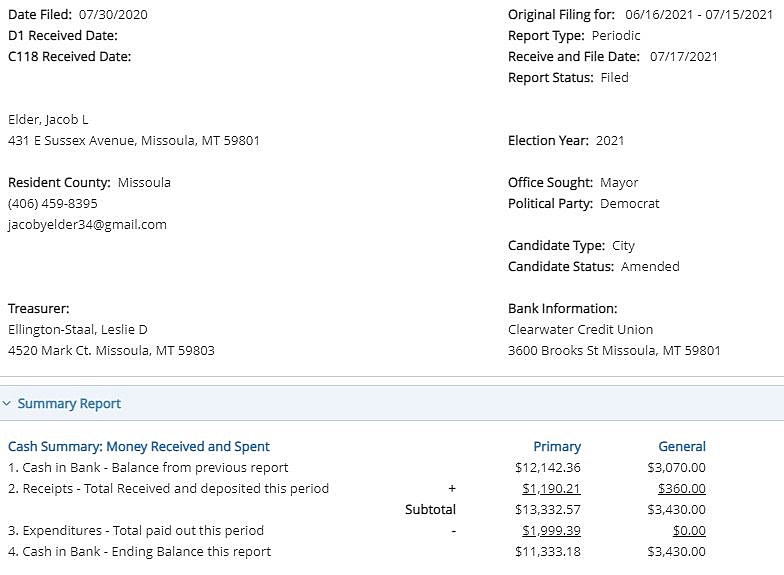 Strandberg’s latest campaign finance report, filed on June 21, showed that his campaign had $150 in its account. No expenditures were listed with the state for that filing period. 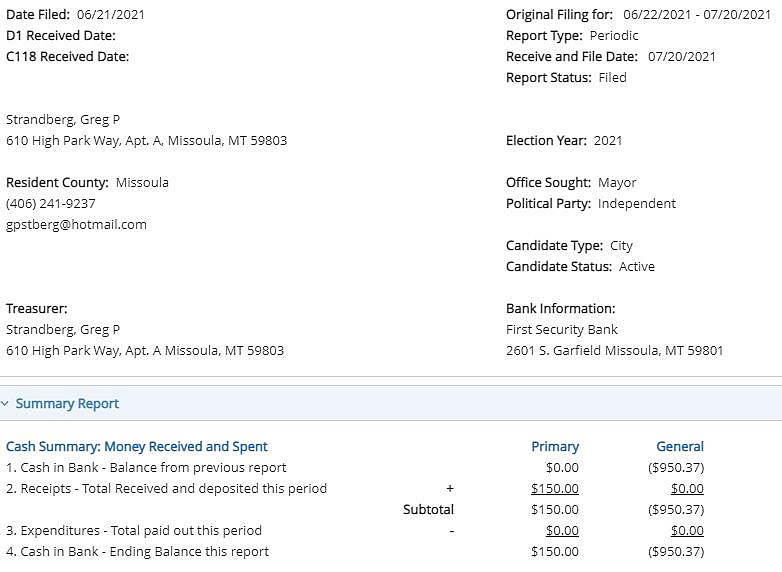 The latest finance report filed by the Engen campaign showed that it had $28,222 in its account before expending $8,290 during the latest period, bringing its account balance to $19,931.

The largest expenditures included $3,000 to Tenacious Campaigns of Missoula for consulting, communications and voter contact, and $1,021 to Brock Development LLC of Missoula for campaign fundraising. 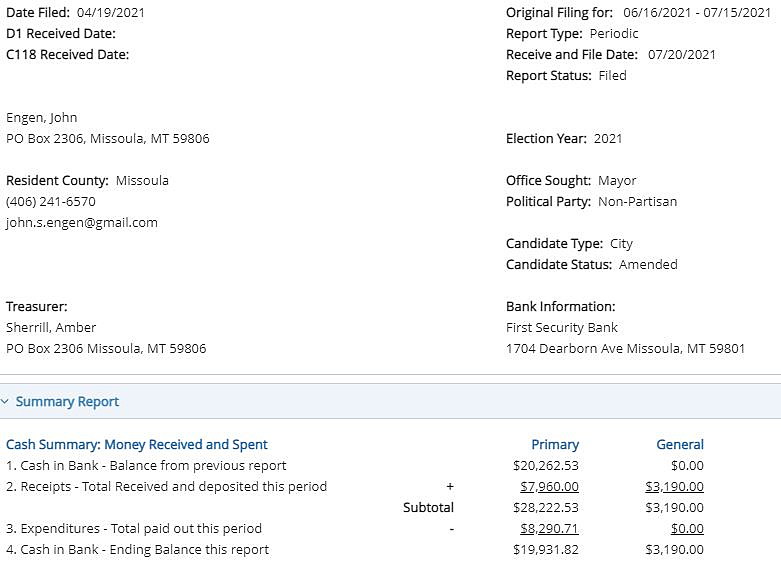 No records were found for Knopp under the same search criteria with the state’s Campaign Electronic Reporting System.

All four candidates have been invited to participate in City Club Missoula’s mayoral debate on August 9 from 11 a.m. to 1 p.m. The event was scheduled to take place live but has been moved to Zoom.