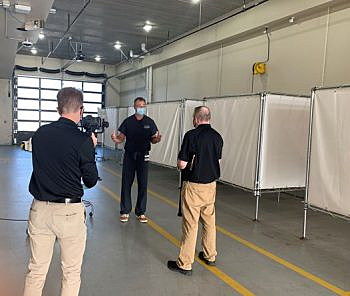 Missoula County recorded five more deaths due to COVID-19 on Friday, marking one of the deadliest days of the pandemic, the health department said.

Friday’s deaths included one young adult, one middle-aged adult and three older adults. Since the start of October, the county has recorded 17 deaths so far. That’s in addition to the 19 deaths recorded last month.

“We’re seeing a significant loss of life in our community, and it’s devastating,” said Missoula Health Officer D’Shane Barnett. “We send our sincerest condolences to the family, friends and loved ones of everyone lost to this terrible virus.”

Hampered by regulations put in place by the 2021 Legislature and Gov. Greg Gianforte, local health officials have no recourse of action other than to urge precautions. The Legislature passed and Gianforte signed a number of bills revoking a health officer’s ability to respond to local conditions.

The state also has banned any mask or vaccine mandate, which other states have pursued in an effort to curb the virus. Montana has made national headlines in recent weeks for its inaction and virus load, including CNN and NPR.

Still, opportunities to question the governor have been sparse. He hasn’t held any press conferences on the issue in weeks. On Thursday, he was scheduled to be in Missoula with an 11 a.m. meeting with University of Montana President Seth Bodnar and a 1:30 meeting with fire officials.

However, the governor’s press officer didn’t release Gianforte’s “public schedule” until 11:35 a.m., well after the meeting with UM was scheduled to take place. 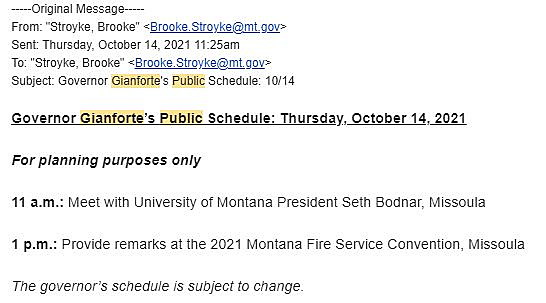 The Mayo Clinic on Friday also reported that Montana had one of the highest Covid-19 rates in the nation, second only to Alaska.

“There were a number of bills he signed off on that made really drastic changes to our local control public health system in the state,” former Missoula County health officer Ellen Leahy told MTN News on Thursday. “He took away fundamental tools for times just like this, and did it in the middle of a pandemic.”