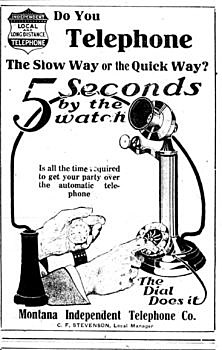 The end may be near.

Smartphones have become ubiquitous. Alexander Graham Bell’s landlines are out of favor.

AT&T is pushing to pull the plug in a number of states, like Illinois, where they say old-fashioned phones can be found in only about 10 percent of households, with those numbers dropping quickly.

What a history, though.

It changed our ancestors’ lives and ours. From the day Bell uttered the famous line, “Mr. Watson, come here; I want you,” it seems everyone wanted to talk.

Within months of Bell’s famous call to Mr. Watson, Montana farmers were stringing lines to talk with neighbors.

In early 1877, the New North West newspaper in Deer Lodge unraveled the basic operation of the telephone for its readers. Calling it a “simple affair,” the paper explained that through a combination of magnets, coils, insulated wires and a thing called a diaphragm, the human voice could be transformed into “undulations that then travel through the wire (to) the coils of an instrument of similar construction” at the other end.

The Rocky Mountain Husbandman newspaper in Diamond City experimented with a line from the office to the editor’s home, calling the “contrivance … simple, novel, and afford(ing) much amusement.”

The Avent Courier in Bozeman told of experiments by “Professor Rolph in Helena and Professor Moore in Deer Lodge” linking phones between the two locations. “Loud tones were used at first, but eventually (the two men) conversed in ordinary conversational tones and each other could hear the other distinctly.”

The Madisonian reported, “The telephone is all the ‘rage’ in Virginia (City) now.”

Copper King William Clark ordered equipment so he could install a line between his residence and his bank, as well as with the Dexter mill. The primitive devices rented for $50 a year.

Across the country, entrepreneurs were setting up so many Bell-licensed co-ops and exchanges that problems arose. Eventually, AT&T was created to link all the local Bell companies.

Missoula’s first telephones were installed in 1879, with the first exchange opening in 1884.

Back then, you could only make calls between 7 a.m. and 9 p.m., with the exchange closed during both lunch and dinner hours.

By the early 1890s, the Western Democrat reported the Rocky Mountain Bell Telephone exchange in Missoula had erected about “10 miles of pole lines, carrying 100 miles of wires.”

The paper reported there were 600 calls a day “or 219,000 per annum (with) subscribers now number(ing) over 100.” The Missoula exchange was connected with a statewide system of long-distance lines reaching as far as Anaconda, Helena, Big Timber and Cooke City.

Competition – and tension – developed as soon as the Bell patents expired in 1893. Independents popped up all over the country, including Montana. The Bell system countered with propaganda campaigns and refusal to connect with some independents or sell telephone equipment to non-Bell outfits.

In 1914, Missoula’s Mountain States Telegraph and Telephone company merged with the Montana Independent Telephone, ending what Missoulian reporter George P. Stone called “the tension which has been felt locally.”

As rapid as telephonic expansion seemed, there were exceptions. Areas like Arlee, Helmville, Ovando and Potomac didn’t have telephones until the late 1950s, when the Blackfoot Co-op finally reached those households.

We marched through the 20th century, morphing from regulation to deregulation, from wires to wireless, from cellphones to smartphones and now, to Dick Tracy-like wrist communicators.

Along the way, though, we lost the human touch.

These days, many young folks don’t know what a telephone operator is … er … was.

Yes, there were actually people who physically “connected” your phone calls by plugging your wire, at the switchboard, into the slot assigned to the party you wanted to reach.

One of those operators was Mabel Sargent of Hamilton. She started working for Mountain States T&T in 1913, eventually becoming chief evening operator. When she retired in 1958, company officials from all over the state attended her farewell party in Hamilton. Traffic manager W. E. Allen, from the Helena office, presented her retirement pin.

Hardly anyone dials “zero,” for an operator anymore. If you did, it likely wouldn’t be someone local, like Mabel Sargent, answering your call.

Today, if you need a number you simply do a voice-search and a pleasant enough, computer-generated voice responds.

But I miss her.