As commuters headed from Stevensville and Florence into Missoula last week, smoke pollution hit an all-time high – more than 1,100 micrograms per cubic meter, in northern Ravalli County. It was hard to breathe. 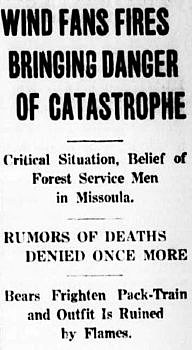 “The smoke of the forest fires … settled down over the Bitter Root valley yesterday – it has been several days since the outlines of the mountains could be plainly seen.

“The sun seemed supported by the thick, sanguine haze and when the moon appeared it looked like a glowing jewel behind the smoke, telling an awesome tale of burning forests.”

Those quotes, from a local newspaper, pretty well summed up the situation.

But they’re actually clippings from 100 years ago – nearly to the day.

Lightning storms moved across northern Idaho and western Montana in August 1917, sparking numerous fires – one of the worst of them, west of Lolo.

Officials tried to mobilize crews from all over the state, but were hampered by a manpower shortage (given the war) and “a serious shortage of automobiles.”

One forester, clearly frustrated, told a Missoulian reporter, “Hundreds of Missoula citizens leave the city for all-day pleasure trips in their cars, yet forests of valuable timber are facing possible destruction because there are not enough cars to take men to protect them.”

By Aug. 23, 1917, more than 200 men were battling the blaze near Lolo Hot Springs, but other fires near Wallace, Idaho, Evaro and Seeley Lake were draining regional resources.

Nonetheless, forestry officials were optimistic they could handle the blazes, if the weather cooperated.

But it didn’t. The following day, newspaper headlines declared:

“Lolo crew cut off from supply base”

The stories told of “an impenetrable blaze, surpassing that of any before this season.” 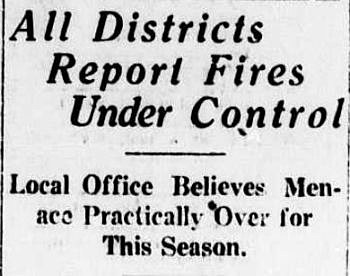 Forest Ranger A. N. Thayer’s crew of 35 men found themselves surrounded by fire. Thayer ordered his men down to a creek, where they rolled in the water as “sparks and burning bark were raining down upon them and the smoke was so thick that several of the men were temporarily overcome.”

A Forest Service telephone operator, R. B. Adams, later told local reporters there were actually 70 men – not 35 – who sought safety in that creek.

At one point, Adams said, they believed they “would never get out alive,” so one of the firefighters took pictures of the group, saying, “I’m going to leave something so that the fellows will know that we died fighting.”

By the time they made it out to safety, “several of the men were burned and others were choked and blinded by the smoke. Two men were badly hurt by falling timber.”

“August 26th, we learned the rest of the 300 firefighters on the Lolo blaze had made it out all right, after the fire swept through their base camp and sent them fleeing for safety,” Adams said.

Even small fires like one in the Burnt Fork canyon near Stevensville broke through the lines, with officials admitting “ordinary tactics in fighting fire are not efficient – everything is so dry in the woods.”

Meantime, a pack train headed to Gold Creek with firefighting supplies encountered two bears on the trail, setting off a stampede with “horses bucking and knocking their packs against the trees.”

Ironically, among the supplies were matches. In all that jostling and rubbing, they ignited. By the time the ruckus was over, “two, 25-men outfits were almost completely destroyed, the tin plates and other utensils being bent and twisted so as to be useless.”

Within a few days, though, the winds died down. The Lolo fire and others became manageable. Fire headquarters reported lines were quickly established and the blazes were “dying down.”

By early September 1917, with rain in the forecast along with cooler weather, Forest Supervisor H. R. Rutledge doubted “we will have any new fires to contend with this season,” adding, “the fire menace for the season will be practically over with.”

Unfortunately, 100 years later, we may have to wait significantly longer, for snow – not rain – to end our current “fire menace.”