The University of Montana faces serious challenges these days – enrollment issues, budget cuts and vacant leadership positions – although the number of incoming freshmen this year is encouraging.

Interim President Sheila Stearns (one of the most optimistic people you will ever meet) is as certain now as the institution’s President Oscar Craig was in 1908, that “The University of Montana … shall prosper.”

Stearns, this week, pointed out past cycles of both turmoil and prosperity. Let me add another.

In the spring of 1917, shortly after the U. S. entered World War I, rumors circulated that the State University at Missoula might actually close. Chancellor Edward Elliot, shown a newspaper account claiming a petition was circulating to that effect, joked it “it must have been lost in the mail.”

But there was reason for concern.

1917 summer enrollment totaled 175, but only 26 were men, according to an article in the Daily Missoulian newspaper. The adjacent column in the paper provided the context: “Sixteen men who were civilian residents of Missoula yesterday morning slept at Fort Missoula last night, as full-fledged members of company E, Second Montana infantry.”

Elliot urged male students who were “not called to the army or navy” to continue their education, pointing out: “This is not a war of brawn and emotion, but of brain and sense, of science and education.”

The chancellor said the university faculty and students should be “a united organization ready to serve and to hold the institution intact during the storm of war.” He proposed new emphasis on courses “useful in time of war,” like nursing.

In late August, Dr. E. O. Sisson, the university’s newly selected president arrived in Missoula from Seattle, emphatic that “education must not be neglected on account of the war.”

While agreeing with Chancellor Elliot that the university would modify its curriculum “if need be, to further serve the state,” Sisson used the war, and the German educational system, to exemplify the importance maintaining “those spiritual qualities that make life worthy.” 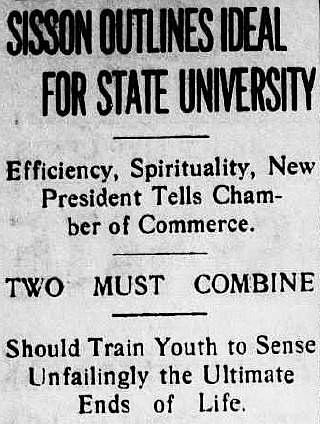 Germany, he told the local chamber of commerce, “thought she had every requisite for success, but her efficiency could not atone for her lack of the true view of life.”

Sisson urged the audience to “consult our hearts as well as our intellects. This means not less efficiency, but more humanity; not less science, nor less technology, but more sense of the total fitness of things, of the ultimate ends of life, of the vast vocation of mankind.”

Meantime, Professor Frederick Scheuch, just returned from a statewide recruiting trip, believed “the prospect for a large enrollment in the freshman class this year is good.” He also met with a number of former students during the trip – students who did not go to war – who said they’d be returning.

First day numbers were encouraging – more than 200, with the number of men, “much larger than had been expected,” according to local press accounts.

The mood, of course, was somber. “Both men and women went about the work of registration with seriousness and determination,” observed one reporter. “There was no hi-jinx interlude anywhere in the day’s program.” 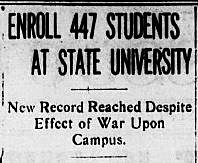 By the end of the second, and final, day of registration, a remarkable 447 students had enrolled – a “new record … despite (the) effect of (the) war upon campus” proclaimed the headline in a local newspaper.

1917’s incoming freshmen would be required to take a new course called “College Education.” The brainchild of the new president, the course, designed by the psychology and philosophy departments, was aimed at helping incoming students understand and deal with campus life.

Lectures would include, “What is the University, How to Study, Health, Efficiency, College Government and The Capacity for Enjoyment.” 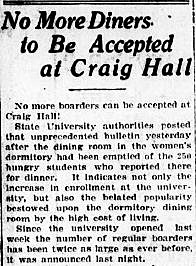 Craig Hall’s dining facility was overwhelmed. With the increasing number of female students on campus and no other such facility available, the dining hall, once the “butt of college jokes,” was mobbed by hungry students, who couldn’t afford to eat out. In early October MSU announced “no more boarders can be accepted.”

Arthur L. Stone, dean of the school of journalism, credited a statewide recruiting campaign for the record enrollment that fall. Stone told local reporters, “the splendid co-operation of Montana newspapers in the campaign for ‘Montana schools for Montana students’ (was) the most effective advertising we have ever had.”

Hmm. “Montana schools for Montana students.” Perhaps that century-old campaign could be dusted off and used again.