John McCarthy was well known around Missoula and western Montana in the early 1890s. 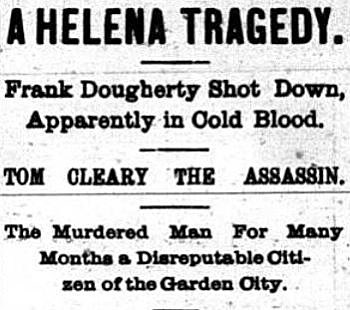 The popular Faro dealer at a local watering hole disappeared one Saturday night. A “most diligent search … failed to establish his whereabouts.” His wife told investigators this was not characteristic of her husband. She was “quite distracted” at his sudden disappearance.

Around the same time, Frank Dougherty and a prizefighter by the name of Tom Cleary spent a night gambling together at Helena saloons.

Witnesses said the two “appeared on good terms” until the early morning when they “had a scuffle.” Dougherty was said to have suffered “the worst of it.”

An hour later, as the pair left the saloon, Cleary took a few steps, “took aim with a large revolver, fired and Dougherty was dead, shot through the neck,” according to press accounts.

Dougherty “was the partner of Delmore, the gambler killed by Billy Fay in Spokane a year ago, and he had a lot of trouble with Fay in Butte afterward, the men going gunning for each other several times, and creating great commotion.”

Such was the gambling scene in the early decades of Montana Territory. The arrival of the railroads made it easy for such characters to move from one place to another, where the everyday entertainment could be summed up as “the triple-W vices of the frontier: whiskey-drinking, whoring and wagering.” 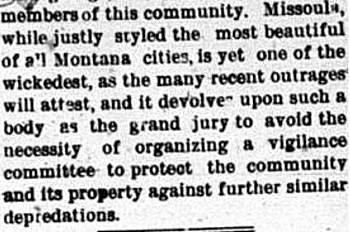 The gambling houses of Missoula, along with the ladies of the night (who regularly drugged their customers – then, cleaned their pockets), gave the Garden City a reputation as one of the “wickedest cities” in Montana.

Poker, Twenty One, Mexican Monte and Faro were standard fare in the saloons, while “Sure Thing” artists populated the railroad coaches.

“Sure Thing” was a swindle developed by Leadville, Colorado, gambler Jefferson Randolph Smith (aka, “Soapy”). You probably know the game – quickly moving three walnut shells and a pea around a board. “Soapy” gave it the name because he didn’t put his own money at risk. The game was so rigged, he said, “It’s a sure thing that I win.”

Anyway, it became a constant scam on the Northern Pacific and other lines. Professional gamblers rode the rails duping passengers all over the West.

In 1884, the Weekly Missoulian newspaper reported, “The ‘Sure Thing’ gamblers who have been operating on the N. P. west of here are in trouble at last.

“Four of them swindled a man out of $1,100 a few days ago, and two were immediately arrested, the other two getting away. All parties were brought here (Missoula), and yesterday some friends of the thieves were trying to get the victim out of town, but the officers were on the alert.

“The railroad company through Supt. Cable is taking active measures to arrest and punish all such swindlers.”

A decade later the con was still being practiced. Lou Hunt, the owner of Missoula’s “Board of Trade” saloon, on Front Street, was arrested and charged with conducting a “sure thing game on his premises,” after a well-respected local doctor, H. H. Hanson, told lawmen about the operation.

With statehood, gambling laws were passed, but not really enforced. That tolerance lasted through the early part of the 20th century.

During the prohibition years, both drinking and gambling went underground.

In the late 1930s, legislation was passed allowing a few games of chance, “as long as gambling establishments paid a ten dollar annual fee.”

In the 1950s, Attorney General Arnold Olsen personally led raids on illegal gambling operations. In the 1960s, the target was bingo parlors.

Finally, by the 1970s, our current gambling and lottery laws began to take shape.

Nowadays, it’s highly unlikely you’ll mysteriously disappear on a Saturday night or be shot in the neck by your gambling partner. But you still may lose your bankroll to those modern-day electronic machines.