Crowded airports, long lines, weather delays – the price of travel these days. Thousands of us have been, or will be, happy to pay the tab to spend time with family and friends this holiday season.

Challenges of a different type faced our great-grandparents.

Let me take you back in time to a wonderful holiday trip in 1879 to what is now a ghost town in Jefferson County.

Wickes was a bustling mining district that had some of the richest silver veins in Montana Territory. The owner of a number of the mines, the founder of Wickes and its namesake, liked to throw a party – no small task in a remote mining camp.

William W. Wickes, a New York capitalist, invited a contingent of government and business leaders from Helena to join him and his workers as they celebrated Thanksgiving in the far-flung camp.

Among the travelers were Territorial Governor Benjamin Franklin Potts, industrialist Samuel T. Hauser (who would be appointed governor a few years later) and a cadre of reporters.

The party boarded a large, fancy Concord coach under the reins of John Rohrbaugh (aka, “the Crazy Dutchman”) and departed at sunrise on the sub-zero Thanksgiving morn.

“The gallant grays … break into a full gallop whenever the nature of the road will permit; trees, buildings, stumps whirl by with great rapidity,” wrote the Weekly Herald’s correspondent.

“We are like schoolboys on a frolic. Jokes are bandied back and forth, the story told and the merry laugh goes round.”

After a change of horses at the Ten Mile station, “We rattle through Clancy at a slashing gait. The citizens look up in surprise, but we go on. Roast turkey won’t keep.”

The VIPs arrived promptly at 12:30, greeted personally by Mr. Wickes.

After an opportunity to straighten their neckties, brush their hair and give their “mustaches an extra twirl,” the guests were guided into the chapel where the tables, “ornamented with pyramids of fruit,” awaited.

“An hour was spent (enjoying) the varied and excellent dishes,” then the host stood, called the room to order and “made a very happy speech,” with the exception of criticizing Governor Potts for his failure to mention the Alta and Bonanza Chief mines, by name, among his list of things to be thankful for in his Thanksgiving proclamation!

“Cheers followed,” wrote the Weekly Herald, “after which the Governor responded with a few lucid words, explaining the proclamation and expressed great pleasure at the brilliant future of the Company.” 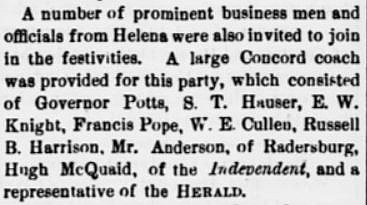 The speeches concluded, the guests wandered the grounds inspecting the camp and the operation’s “new works.”

Then, promptly at 4 o’clock, the Governor and other guests boarded their coach for the return trip to Helena.

“The Crazy Dutchman spares no horse flesh, and the exciting experience of the morning is repeated,” writes the Herald reporter.

“Soon the moon comes up and lends her soft enchantment to the frost landscape. At 8 o’clock we rumble into Helena, the whole party being unanimous in their expressions of the pleasure the day afforded.

“What would our Eastern friends think of riding fifty miles, discussing a Thanksgiving dinner, making speeches, and getting home after an absence of just twelve hours?”