Hopefully this Thursday we’ll all set aside our politics and give thanks for all that is good about us – America and Montana.

We live in a special place – this country and this state of ours. Compared with so many other locations around the world where people face war, famine and dozens of other perils, ours is a pretty wonderful life.

Now and again we forget that. There have been moments in our history when we haven’t seen any reason to be thankful, and others when we even squabbled over what date to observe Thanksgiving!

In 1893, the editor of the Philipsburg Mail, upon receiving President Grover Cleveland’s Thanksgiving Day proclamation fumed, “Thanksgiving! What on earth have the people to be thankful for to the United States government the past year?

“Emperor Cleveland’s policies … have brought ruin and starvation upon a large part of our population, and an empty stomach is a poor thing to back up a thankful prayer.” 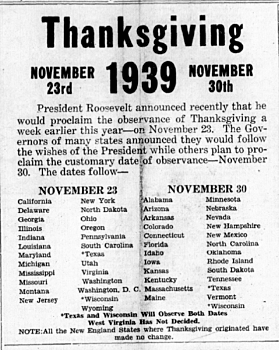 Then there was the time President Franklin Delano Roosevelt broke with tradition (dating back to Lincoln) and inexplicably declared November 23rd as Thanksgiving Day, rather than the last Thursday of the month.

Governors in half the states refused, setting Thanksgiving on the 30th instead.

Montana did go along with the Roosevelt date, but Red Lodge Mayor Siefriedt (wanting to remain neutral on the issue) ” … proclaimed two Thanksgiving holidays: Thursday, November 23 for the Democrats and Thursday, November 30th for the Republicans.”

Thanksgiving occasionally has been celebrated on the wrong day – by mistake.

The Yellowstone Journal reported that in 1876 four companies of troops made camp for the winter near Glendive and “(Thanksgiving) dinner was ate with great relish.” A few days later, the monthly mail arrived with news the holiday was set for the following Thursday. The troops asked for a second, real Thanksgiving. The request was denied.

Sometimes the holiday went by with little notice. In 1864 D. W. Tilton, the editor of the Montana Post in Virginia City, spent the day alone, musing, “Thanksgiving day passed over very quietly – no big dinner nor dance … no invitations to come and have a square meal or a square drink,” although he did acknowledge the receipt of a “gallon or so of egg-nog and a huge pound cake” from a couple of local bar-keeps. 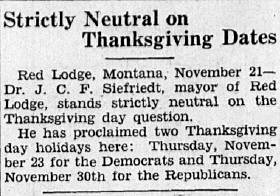 In 1872, Helena celebrated with “religious services … turkeys, mince pies … sleigh rides … and other items of observance, indulgence and pastime,” reported the Daily Herald.

By 1882, in the Missoula area, there were so many grand balls scheduled on Thanksgiving night some had be pushed back to later dates. The organizers at the Arthur House promised “every pain will be taken to make this the grand ball of the season, and every possible attention shown to guests.” A similar gala in Stevensville was postponed “on account of similar festivities in Missoula and Corvallis.”

Another highlight of the Thanksgiving holiday in early day Montana was the “turkey shoot.”

The Bozeman Chronicle reported so many people turned out in 1886 for a “two bits a shot” event that the promoter “did not come out very much ahead.” The organizer said, “Every time a gun went off, a chicken’s head went off, too.”

There aren’t many grand balls anymore; few turkey shoots, either.

But Montanans (then and now) have much reason to be thankful.

I’ll leave you with some thoughts from the editor of Fort Benton’s River Press, 1883:

“The present year has witnessed the completion within our borders of the great transcontinental highway, which binds us with ribs of steel to the sister territories and states.

“Fields have yielded bountifully … (livestock numbers) have increased without ravages of disease to diminish them. The ensuing interests of our young, thriving communities have been in the main successful. No epidemic has spread among our increasing population.

“Taking our general prosperity as a criterion, if any section of the country has just cause for returning thanks for feasting and self-congratulations then Montana should have a joyous holiday on the Thanksgiving day.”