I love science … and inventions. Every day, there’s something new to amaze or to help make life easier.

For instance, if you love music but have never been musically inclined, it’s now possible to play the piano with ease, thanks to the Stephonium!

A story in the local newspaper says J. C. M’Gee of Edinburgh invented the device. He says it’s as easy as placing a sheet of music behind his specially designed electrical wires which, when struck, send a signal to the corresponding note on the piano.

“By sliding the sheet up or down (on the electric musical interpreter), the whole range of notes is quickly transposed to another key.” 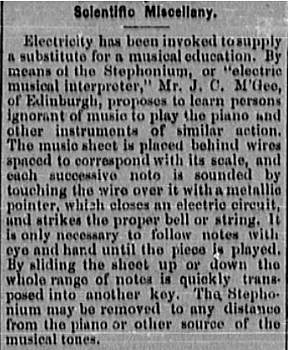 Best of all, the “Stephonium may be removed to any distance from the piano or other source of the musical notes,” so you don’t have to sit on an uncomfortable piano stool to play – you can recline on the sofa.

I guess it never caught on, though. The story was published in April of 1888.

Here’s another one. Wouldn’t it be great to close your eyes and breathe in the fresh, salty air of the coast, especially on a frigid Montana day?

After all, it says in the paper that a pleasant sea breeze “is probably the best purifier of the air … ever used. It is a powerful disinfectant … as well as deodorizer.”

According to a news report in the 1884 Billings Herald, all that’s needed is a solution of hydrogen peroxide, ozonic ether, iodine and some sea salt.

Darn it. I’m out of ozonic ether.

Now for horse owners, the same paper had some great advice for snow tires for your horse. Rather than standard horseshoes, use sheep’s horns in the slippery winter months.

Some folks in Lyon, France experimented with sheep-horn shoes and found that horses “thus shod have been driven at a rapid pace on the pavement without slipping.” They’re a bit more expensive than traditional horseshoes, but your safety is worth it!

For our farmers, the Rocky Mountain Husbandman newspaper has a neat story from Scientific American about a man who’s invented a revolutionary new plow.

The inventor “describes a machine that is rigged with large wind-wheel sails, has a tiller for steering, will travel uphill or down, and with the wind in any direction.”

What’s more, he says, they don’t cost a lot to put together.

“A full-sized one of 60 horsepower may be depended upon to draw ten ploughs four miles an hour, ploughing four acres and hour, with but one man in attendance.”

Factory-built housing might seem a 20th century idea, but that’s far from the case. An item in the Livingston Daily Enterprise in 1884 tells of a plant in Maine producing “ready-made houses” just like “books and shoes, in any quantity, and of any size or style, and for any market in the wide world.”

Here’s some historical perspective on a modern-day curse. 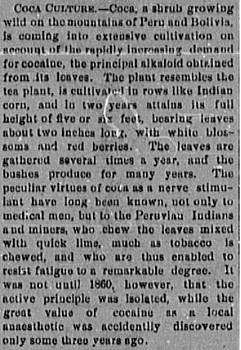 The 1887 Missoulian reported on the rapid increase in production of the coca shrub in Peru and Bolivia, to meet the “rapidly increasing demand for cocaine” worldwide.

Locals had long been chewing the leaves to “resist fatigue to a remarkable degree,” while the rest of us had only recently discovered the medicinal and anesthetic value of the plant.

The 1800s were just buzzing (pun intended) with scientific discoveries.

The Fort Benton River Press in 1885 described new research into the working life of bees. It seems they go to work each day with the equivalent of a basket, a brush and a pair of pliers to gather pollen. Fascinating.

It also reported on how flies can attach themselves to smooth surfaces, even upside down, and not fall. Apparently, it has to do with “a liquid secretion from the feet” and the stickiness of “capillary attraction.”

Of all the 19th century discoveries, though, there is one from which we all would have benefited had it been more widely known.

The story came from the Louisville Courier-Journal in 1888 and was reprinted in Montana newspapers. It concerned the proper way to attach a stamp to an envelope. Yes, we’ve all been doing it incorrectly. 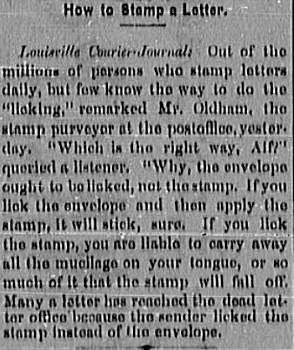 A postal employee was reported to have told a customer: “Why the envelope ought to be licked, not the stamp. If you lick the stamp, you are liable to carry away all the mucilage on your tongue, or so much of it that the stamp will fall off.

“Many a letter has reached the dead letter office because the sender licked the stamp instead of the envelope.”

I wonder if this would apply to email?

But do I lick the screen … or, the keyboard?