It’s time for a road trip. Our destination: Maiden, Montana.

Haven’t heard of it? Well, it’s just northeast of Lewistown. Here are the stats:

The local paper, the Mineral Argus, says Maiden lies in “a beautiful, fertile valley … surrounded by the Judith Mountains.”

Mining’s the main enterprise, but ranching is a close second. Cattle and sheep numbering in the tens of thousands are managed by some of the region’s largest stock companies. The local paper says “as fine a grazing and agricultural district as can be seen … in the northwest, surrounds and joins the town on all sides.”

Let’s check the local paper for a place to stay. There’s an ad for the Ubet Hotel. They claim to be “first class,” with in-house dining and even a general store connected to the property. 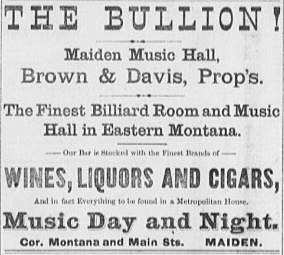 Another option is the Pacific House. They serve meals “at all hours, day and night,” with a menu boasting “everything the market affords.”

Sounds enticing. I might want a midnight snack. They have “good, clean beds,” too.

Then there’s the International Hotel which boasts a “European cafe.” Wait, there must be a typo in the ad. The rates are listed as $2.50 a night. That can’t be right.

It looks like some of the local restaurants have farm-to-table programs.

The Mineral Argus says Maidenites (that’s what the locals are called) “are well supplied with all kinds of vegetables fresh from the fields. Several parties deliver vegetables three times a week.” They have locally grown beef, too.

Now, how about entertainment while we’re visiting?

There’s Joseph Mason’s Billiard Hall. It doesn’t list an address, but it shouldn’t be hard to find. It’s right next to the newspaper office.

“Fine Brunswick and Balk billiard and pool tables,” says the ad, and a “bar stocked with the best brands of liquors and cigars.”

Another possibility is the Bullion. It’s both a billiard room and a music house, with a beautiful grand piano. They have “everything to be found in a metropolitan house (with) music day and night.” Legend has it Calamity Jane used to throw back a few there.

The Lewistown Democrat News recommends the “Landusky & Hamilton house (as) the most popular because of Charley Bell and his violin.”

They also suggest Louis Landt’s Maiden Brewery. “If kept up to its present standard — and we can see no good reason why it should not be, and, if anything, improved, as the tanks and vats get the proper condition by use — Landt & Co. should experience no trouble in disposing of all they can brew, in the Judith and Musselshell countries.”

Unfortunately, our trip is just a dream.

But between May 1880 when prospector “Skookum Joe” Anderson and others struck gold and the turn of the century, Maiden boomed.

Saloons, dry goods stores, blacksmith shops, restaurants and hotels sprouted like desert flowers after a rain. The trouble was, none of those concerns actually owned the land. The whole town was located within the Fort McGinnis military reservation, and in 1883 the government ordered everyone to “vacate.”

A compromise was eventually reached with the government (reducing the size of the military reservation to exclude the town), but like so many other mining camps, when the gold ran out the town faded away.

A few of the mines held on until the turn of the century, but Maiden and all its attractions are now gone; abandoned, then destroyed by two fires in 1905 and 1927.

Today, only a handful of structures – rubble, really – remain.