If the house flies are buzzing about madly or if fleas are numerous, expect wet weather or hail. On the other hand, if gnats are swarming in the sunshine, you’re sure to have fair weather.

And don’t even get me started about ants. They’re responsible for every which kind of weather.

I know – these days everyone just checks their smartphones or tunes in to the radio or TV for the forecast, but it was a bit different back in the 1800s. Many people relied on folklore or local weather sages.

A man named Tice from Radersburg visited Helena in June 1880 telling a reporter from the Weekly Herald “that the weather will remain cool until the 22nd, when warm summer weather will set in.” Mr. Tice’s information was “generally proven correct,” according to the Herald. 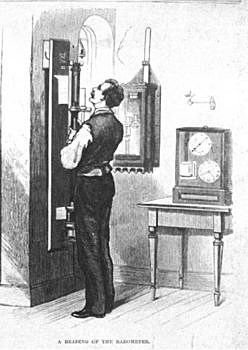 Henry G. Vennor, calling himself a “practical meteorologist,” sent out letters to Montana newspapers prophesying that late December 1883 and early January 1884 would be unusually mild – “even summer weather.”

Not so, declared X. Biedler. The Fort Benton River Press quoted Biedler “prognosticat(ing) a three- or four-day storm at the time of the next new moon, on the 29th (of December). X. says he can double discount Vennor in Montana as a weather prophet.”

A number of weather gurus built national reputations, including “Professor Blake of Kansas” and “Reverend Ira R. Hicks, the Missouri weather prophet.” Their prognostications were carried in papers across the country.

Critics, though, accused them of profiting from the ignorance of the people. One wrote, “As long as the common people are kept from knowing how to read a United States weather map, so long will Hicks remain a superhuman being in the eyes of the uneducated.”

Scientific weather forecasting began in the mid-1800s. The telegraph made it possible to gather volunteer weather reports from enough locations, in real time, to predict the direction and speed of large storms.

In 1870, the Army Signal Service, was created “to provide for taking meteorological observations … and for giving notice … by magnetic telegraph and marine signals, of the approach and force of storms.”

At first, forecasts were given for large regions. By 1886, forecasts narrowed to “states, or parts of states.” Locally, the Signal Service used everything imaginable to communicate their forecasts to the public, from flags and balls to steam whistles and bells.

Eventually, they settled on a series of white, blue and black flags to announce weather changes.

It would have been great to know what it was like to be an early day Signal Service employee, but no one documented their lives. Luckily in 1922, Henry Williams, a Weather Bureau employee, realized the pioneers of the Signal Service were getting old and their stories would be lost to history. So he asked many of them to write down their recollections.

But the papers were never published and did become lost – hidden away at the National Archives – until being found the 1990s.

One old-timer recalled the Signal Service as a tough life – after all, they were in the Army.

They endured everything from bed bugs at training camp (“They kept us scratching for a living throughout the summer of 1881”) to long shifts on the job (“I was expected to take the 6:36 a.m. observation and stay on until after the 10:36 p.m. observation was taken and filed”).

An Army regulation read, “Unnecessary conversations, writing of private letters, and reading of newspapers during office hours are strictly prohibited. Conversation necessary to the proper dispatch of business will be carried on in a low tone of voice.”

In April 1876, one graduate of the Signal Service School of Instruction at Fort Myer, Va., nearly froze to death hiking to the Mountain Meteorological Station on Pikes Peak and the Base Station at Colorado Springs. 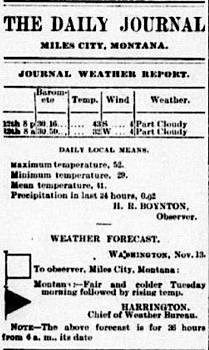 In 1885, Signal Service “rookies” undergoing their initial training at Fort Myer endured such severe verbal abuse they complained to the top brass, but it backfired. The whole class was court-martialed. Finally, Congress investigated and decided to convert the whole meteorological division to a civilian operation.

At times, local townsfolk were a bit wary of this new “science” and particularly its associated equipment.

W. Smith of the early Signal Service wrote, “My predecessor at a small southwestern station at Corsicana, Texas, told me that soon after establishing his station he was waited on by a committee, appointed by dissatisfied citizens on account of the very unsatisfactory weather conditions caused by the meteorological instruments as there had been no such weather before ‘them things were set on the roof.’

“All the explanations that could be made proving unsatisfactory, the official suggested they adjourn to the cafe over the way for further discussion, where it cost our man about $25 for sufficient refreshments to convince the committee that the weather instruments were not at fault.”

As scientific weather forecasting become more commonplace in the late 1800s, public interest in and respect for the service and its forecasters grew. “In some places, (the forecaster) was as important as the postmaster.”

“It was during the great storm of ’88; all wires were down, there was a dearth for news and the ambitious 8-page paper of a western town had to be filled. Frantically, the editor dispatched two of his men to the weather office.

“The next morning … the entire front page was devoted to weather; weather of past years, weather on Mount Washington, weather forecasting, weather here and hereafter.”

Today, over 100 years later, weather is still often given the lead in the nightly TV newscast and weather personalities still tend to be popular – the big draw for local TV news ratings.

They never seem to mention the ants, though.