Elevated levels of lead and a protracted environmental review have slowed a downtown housing development planned by a Missoula nonprofit on Front Street, though the agency says the project is expected to move forward.

Yet questions surrounding high levels of lead and the cost of mitigation have prompted the city to withhold a $50,000 reimbursement earmarked for deconstruction of a building at the Front Street property.

Ellen Buchanan, executive director of the Missoula Redevelopment Agency, said that if the North Missoula Community Development Corporation can show that its townhome project is still alive, the city will honor the contract and reimburse the funding.

“If we’re convinced this project can happen, we can release the funds,” said Buchanan, who also directs the city’s Office of Housing and Community Development. “But up until two days ago, I was definitely not convinced if it would happen or not. If the project doesn’t go forward, any of those funds have to be repaid.”

The North Missoula Community Development Corporation received the property at 503 E. Front St. as a donation in April 2015. It planned to raze an old apartment building on the site and build seven affordable townhomes in its place.

That December, the U.S Environmental Protection Agency completed an environmental assessment, as required by law when federal funding is at play. The assessment took four soil samples surrounding the perimeter of the old building and found elevated levels of lead in each of them.

At the time, it was thought that the lead stemmed from exterior paint. It wasn’t a bad assumption given the age of the building, which dated back to the 1860s and saw numerous additions over the years.

“None of the lead issues are surprising,” said Bob Oaks, executive director of NMCDC. “The problem we’re having is with the reimbursement. We’re very concerned about lead levels existing in the soil, but that’s not new information.”

After the initial round of testing, NMCDC proceeded with its plans to develop affordable housing on the site by securing several pools of funding, both local and federal. MRA also approved a contract permitting NMCDC to deconstruct the old apartment and prepare the Front Street property for redevelopment.

Deconstruction took place this summer, leaving a vacant lot with the remains of the old foundation. But additional soil testing conduced last month found the lead contamination was both deeper and more widespread than previously thought.

What’s more, according to Heidi West with NMCDC, it didn’t likely stem from the old building’s paint. Samples found under a 75-year-old tree suggest the lead had been present for at least the age of the tree.

“What they found, basically, is some clear areas in the front and back, and everything else has these elevated levels of lead,” said West, who is also a member of the Missoula City Council. “This contamination has been in this area for 75 years-plus, and they don’t know where it’s from.”

Oaks believes the lead could have come from fill dirt applied after an old city flood.

That latter concern has caught the attention of local health officials, though the revelation is so new that a response hasn’t been composed.

“There is concern that the lead contamination is more pervasive and may have a systemic source,” said Sindie Kennedy, who conducted an environmental review on the Front Street property. “The engineer conducting the assessment speculated that the situation could be fairly widespread on the north side of the river due to fill brought in over 75 years ago, or flooding.”

The Front Street district, one of the city’s oldest, is undergoing something of a building boom, including new condominiums and plans for a new Missoula Public Library.

Concerns over widespread lead contamination haven’t been publicly expressed at past MRA meetings when it comes to redevelopment in the district. Most private development doesn’t require the level of testing that does NMCDC’s federally funded housing project.

How concerns over lead pertain to NMCDC’s plans to build affordable townhomes remains to be seen, though plans have been made to mitigate the site and push forward. MRA is looking for certain sureties before it releases the $50,000 reimbursement.

“What was found when this additional testing was done that virtually the entire site has lead contamination, and some of it is as deep as 18 and 24 inches,” Buchanan said. “DEQ is convinced that they have adequate funding to remove all the contaminated soil, which then begs the question if there’s enough money in (NMCDC’s) budget to bring back that amount of fill.” 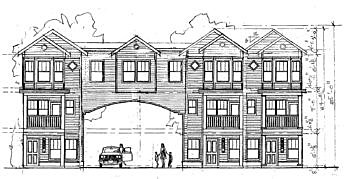 West said NMCDC has funding in its budget to supply the additional fill and replace whatever is taken from the site. West said her organization will have a bid on the cost next month.

While any shortfall is unlikely to derail the project, it could further challenge MRA’s ability to reimburse NMCDC for deconstruction and site prep, at least until the bank approves the organization’s construction loan.

Design plans were submitted to the city this week.

“That was already an existing line item,” said West. “There’s already existing funding for that. It’s more volume of soil, but they’ll be excavating all the foundation already. Hopefully that line item can function to back-fill the site.”

Once the bank approves the loan and NMCDC shows the project is moving forward, Buchanan said MRA will release the $50,000.

“I didn’t feel staff could reauthorize reimbursement of that magnitude if the project is in question,” said Buchanan. “We have to believe all the financing is in place, and it’s not until First Interstate (Bank) approves the construction loan.”