Western poll: Next Interior secretary should make decisions from science 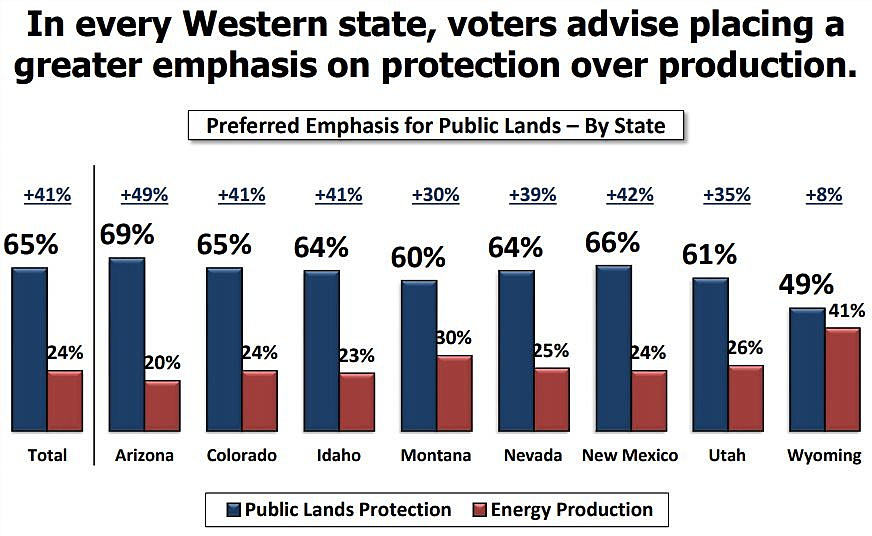 Residents in eight Western states including Montana believe the next Secretary of the Interior should emphasize conservation and make decisions based on science, according to polling results released Thursday.

The Conservation in the West Survey, conducted annually by Colorado State College and the State of the Rockies Project, also found that 65 percent of residents favor a focus on conservation and protection over production.

In Montana, 60 percent favored protection, while 64 percent did so in Idaho.

Corina McKendry, director of the State of the Rockies Project, said the results of this year’s poll weren’t surprising. The figures show growing support for conservation across the West and suggest changing views on public lands and the role they play in the Western economy.

“That a leadership agenda out of step with those values is met with disapproval in Montana is no surprise, although the rejection of the current administration’s priorities is particularly intense here,” McKendry said of the poll’s findings. “Over the history of the poll, we have consistently seen bipartisan support for protecting public lands and outdoor spaces.”

The poll tests the mood of voters each year on policies impacting the use and protection of public lands across the Rocky Mountain West. Roughly 75 percent of Westerners now view rollbacks to environmental laws as a serious problem – an increase from 68 percent just a year ago.

The findings suggest that most Rocky Mountain voters disapprove of the Trump administration’s public lands agenda in the West.

“The poll shows that most of us want our elected officials to support policies that protect and maintain access to our public lands and waters,” said Amy Roberts, executive director of the Outdoor Industry Association. “We hope they now take an opportunity to build bipartisan support on these issues.”

Two-thirds of those polled considered the Trump administration’s push to lift protections from national monuments as a “bad change.” In Montana and Idaho, 65 percent of voters agreed, while 72 percent agreed in Colorado.

Voters in Montana also want Congress to challenge the Trump administration’s priorities on public lands. More than 80 percent of residents in Montana – and 83 percent in the eight states combined – also support the Land and Water Conservation Fund.

Montana Sens. Jon Tester and Steve Daines have advocated for restoring the fund, which expired last year. They also support protecting areas outside Yellowstone National Park from mining. The majority of those polled favored water and wildlife protections over mineral extraction.

Tester expects the legislation to move forward next week.

“That’s the plan, and hopefully it doesn’t get screwed up,” Tester said. “It got held up by one senator (from Utah). I think this thing will pass 95 to 5, or something like that.”

This year’s poll also found that 76 percent of all Western residents support protections for waterways, and 61 percent favor conservation. More than half said they support incentives for landowners willing to conserve natural areas instead of developing them.

“At a time when our country is so deeply divided, conservation continues to be the issue that can bring Americans together,” said Dave Chadwick, executive director of the Montana Wildlife Federation. “These results show shared support, not only for wildlife stewardship in Montana, but also the growing consensus that fragmented habitat and migration corridors need collaborative solutions.”