Several hundred high school students marched on the Missoula County Courthouse on Friday to call on lawmakers both at home and in Washington, D.C., to take action on climate change.

It’s their generation, they said, who will inherit the consequences of a warming climate and the impacts of congressional inaction, even while action can still make a difference.

“The climate is changing and our policies aren’t,” said Hellgate High School student Marrin Kolczak Hardy. “If we don’t do something, we’re going to be left with the mess the older generations have left for us, and I don’t think that’s really fair.”

Students, mostly from Hellgate, left class shortly after 1 p.m. to march across the city before gathering en masse at the courthouse. The event coincided with a national youth movement, where thousands of students from across the country and in Europe expressed frustration over America’s general inaction on climate change.

In Missoula, no political party was spared, though the actions of the Trump administration played as a common theme, even if some students were reluctant to mention the president by name.

“The one who’s our current president has put a lot of fault on what he claims to be fake science and fake news, so it’s not giving credibility to the scientists and people aren’t giving any notice to the fact that climate change is a big, global problem,” said student Kyla Voggess. “All of this comes down to people not having the proper education about the global epidemic of climate change.” 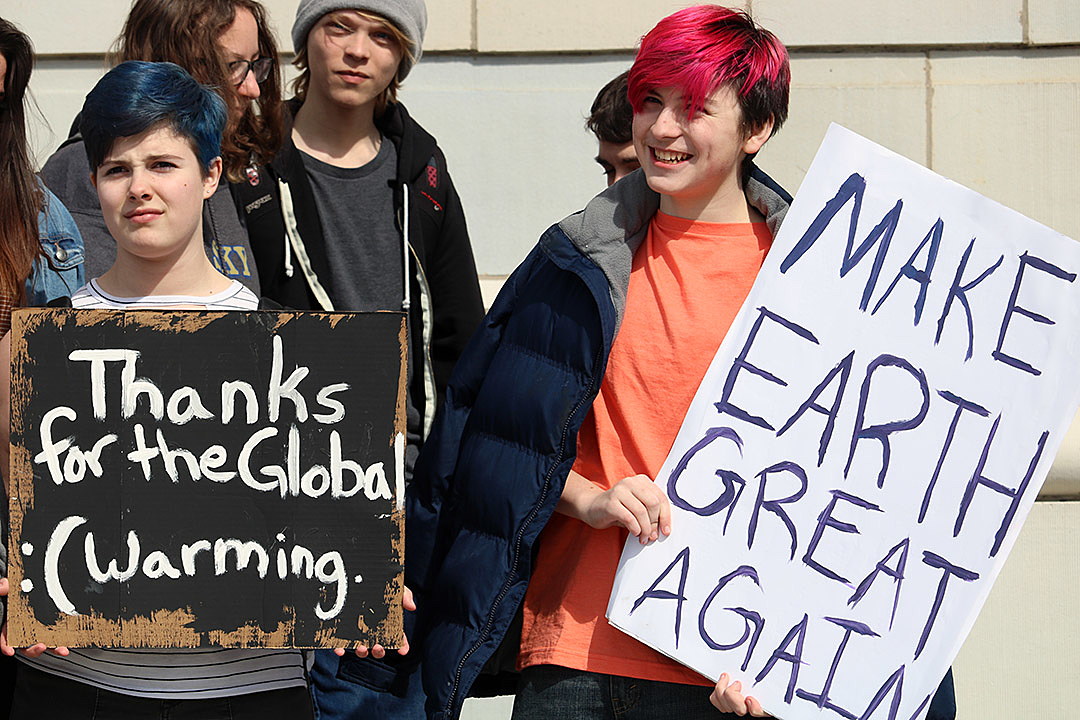 According to the 2018 report from the United Nations Intergovernmental Panel on Climate Change, world leaders have just 11 more years to curb carbon emissions and avoid what science suggests may be a point of no return.

Missoula County this week passed a resolution pledging to achieve carbon neutrality by 2035. The city adopted a similar measure two years ago. Both local governments are expected to team up in a joint effort this spring to begin a path toward 100 percent renewable electricity.

That’s despite the Trump administration’s threat to pull the U.S. from the Parris Agreement, a global pact that aims to curb carbon emissions. Many of the students on Friday were well aware of the agreement and what’s at stake if it’s not achieved.

“It’s the fact that our government isn’t doing anything for our climate,” said student Aurora Segerstrom. “They’re just ignoring the fact that it’s a very big problem. It’s like blatant ignorance about the fact that we’ve already messed up our environment.”

Students are increasingly concerned about the planet they stand to inherit. The rapidly shifting climate, sweeping changes in ecosystems and the extinction of species weighs heavily on their thoughts. The future health and safety of humans in a world where water and food could run scarce as the climate warms also is a concern.

“They’re blatantly ignoring years of research and science on climate change and denying the fact that anything is taking place within our climate that can damage property, human beings and nature,” said Charlotte Green. “They’ve cut so much funding and research across the nation and worldwide for programs that can actually fix this issue.”

Among other things, students across the country are calling for a general reduction in greenhouse gases and new regulations that will achieve the goals of the Paris Accord.

They’re also seeking an end to fossil fuel subsidies, preservation of wildlife and public lands, and acceptance of the Green New Deal. The latter could play a role in the 2020 presidential race, and many of the students at Friday’s march will be old enough to vote.

They’re also demanding that Montana lawmakers, including those in Helena, listen to their generation.

“I’m really sick of being told we don’t know anything and being told we have a political voice, then being told we can’t really use it,” said Hardy. “But I think all of us combined have a voice in the matter. All of us showing up today to show we care, I think that makes it impactful.”

Sustainable Missoula: High school students fight for the climate, and their lives