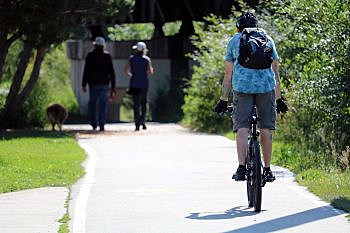 The proposed purchase of an easement later this month would finally connect the Milwaukee Trail to the Mullan area as part of a regional transportation plan ahead of anticipated growth and development.

Now, there’s a chance the trail could run even further – to the Missoula International Airport.

“I’ve been working on extending the Milwaukee Trail, which is something that’s been sort of prioritized in all of our plans,” said Grant Carlton, manager of the city’s open space program. “I’ve had a really productive conversation with the airport, and they are willing to sell us their portion of their Milwaukee Trail which is pretty substantial.”

In an interview with the Current, Carlton said the catalyst for the talks was the Mullan Area Master Plan, which looks to prepare for a growing population and increased development.

“The airport is out there, and we wanted to get on top of anything we could and make sure we’re providing park land and open space opportunities for the folks that might be living out there,” Carlton said.

The talks also follow nationwide efforts to connect rails with trails, as intended by the Great American Rail-Trail, an organization seeking to create a network of public trails from former rail lines from coast to coast.

“It’s part of our priorities, but it’s also part of a nationwide effort to create this really cool trail system,” Carlton said.

Not including the planned expansion across the Clark Fork River, the airport transaction could roughly double the city’s existing 3.2-mile trail with an estimated 3-mile addition. The portion exists on the boundaries of the airport.

Carlton said they’re currently looking at all options for the parcel. Before any purchase by the City of Missoula, it would have to go through an appraisal process.

Carlton will start working on the potential transaction in January or February. From there, he’ll help the airport navigate the complexities of the transaction.

“I’m going to basically lead that horse to water,” Carlton said. “I’m going to do most of the heavy lifting for them because it’s out of their wheelhouse and they’re all very busy with the expansion going on. I’m hoping to tackle that first thing in the new year, so hopefully we can keep the momentum with the Milwaukee Trail going.”