Citing its tranquility, habitat and economic might, Missoula County on Thursday submitted a letter to the Nez-Perce Clearwater National Forest voicing opposition to a proposal that would allow motorized winter access in a prized roadless area.

The forest district is conducting a revision of its forest plan, which encompasses the Great Burn and Hoodoo Roadless Area. Access to wild lands near a major population center, such as Missoula, provide a number of benefits, ranging from key habitat to economic support.

As a result, the county fears that proposed management changes to the Idaho side of the Great Burn and Hoodoo Roadless Area could have negative impacts.

“We are aware of the interest some have in expanding motorized winter recreation opportunities, but do not feel this is an appropriate location for that use,” the county wrote in its letter to the Forest Service.

“We believe there are more suitable locations for motorized winter use and would be interested in working together to address the needs of recreation communities in ways that do not negatively impact wildlife populations that are already subject to increasing habitat fragmentation, the stressors of climate change and increasing recreation pressure on our wild areas.”

In its letter, the county contends that the Great Burn is key to the conservation of native fish and wildlife species, as well as maintaining a valuable ecosystem.

The Great Burn connects wildlife habitats in a number of directions, and Grizzly bears move through the roadless area, providing connectivity between otherwise isolated populations.

“We had some inquiries from the Montana Wilderness Association and Great Burn Wilderness Alliance requesting a letter of support for the Nez-Perce Clearwater forest plan revision, supporting the Great Burn and Hoodoo Roadless Area,” said Kylie Paul. “It’s requesting the current management of the Great Burn remain as it stands.” 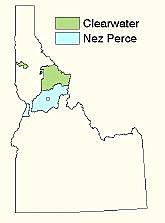 Paul, the county’s natural resource specialist, crafted the letter at the request of county commissioners. Aside from its habitat attributes, the county said area’s non-motorized recreational opportunities contribute significantly to the county’s tourism economy.

Last year, according to the county, it accounted for more than $284 million in expenditures from nonresidents. The area’s qualities support a range of businesses including outfitters, cartographers, fishing guides and gear shops.

The county said the area’s fisheries are also significant, making them another prized attribute that need protecting.

“Salmon spawning habitat is found in the headwaters of the Crooked Fork in the southern part of the Great Burn,” the county wrote. “Kelly Creek is a source of cold, clean water that sustains a blue-ribbon cutthroat trout fishery and Cayuse Creek functions similarly.”

According to the Friends of the Clearwater, based in Moscow, Idaho, the Clearwater Basin represents the “largest undeveloped watershed complex left in the Lower 48.

Brett Harvestick, the education and outreach director for the Friends of the Clearwater, said in a column to the Spokesman Review that the proposal also includes an increase in logging that targets much of the roadless backcountry.

“There are approximately 1.5 million acres of undeveloped wildlands on the Nez Perce-Clearwater National Forests,” he said. “Along with designated wilderness, they provide some of the best fish and wildlife habitat in the basin. Regrettably, these irreplaceable landscapes could, instead, be lost for future generations.”