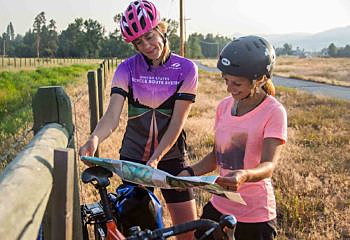 Overflow parking at a popular river recreation site and a new master plan guiding paths and trails are expected to greet Missoula County recreators when the snow and ice retreat in the spring.

Commissioners this week approved an agreement with the city to provide roughly $70,000 toward the county’s Pathways and Trails Master Plan – an effort that began last July and is expected to be finished this year.

The plan will serve as a long-range guide to build priority pathways across the county, according to county planner Travis Ross.

“It’s targeted as a shared-use trail system outside the city of Missoula,” Ross said. “We’re a little over halfway through it. We believe it’s going to be a good product.”

While the plan guiding trails moves toward completion, the county will also see work begin this year on an overflow parking lot at Sha-Ron, a popular recreation site on the Clark Fork River just east of Missoula.

Efforts to address safety concerns began nearly two years ago when commissioners met with the Montana Department of Transportation to discuss Sha-Ron and the jam of cars that often line Highway 200 once the small parking lot fills.

But last week, the county signed off on a $54,000 agreement with WGM Group to design and bid a new overflow parking area. As proposed, the project would provide 84 additional parking spots north of the current parking lot.

The project also includes a vault bathroom and a trail connecting the new parking lot with Sha-Ron. The goal is to keep cars from parking on the shoulder of the road. The county has attempted to address that concern at other river locations.

“This is a big deal,” said Commissioner Dave Strohmaier. “It’s exciting to get this project moving along. It’s been a long-standing community issue.”