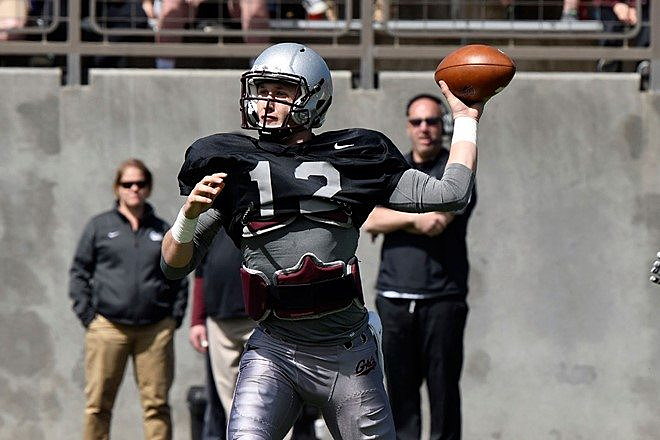 If there was one thing fans wanted to know as Montana head coach Bob Stitt made his way around the state during the annual GSA Spring Tour in May, it was this: Who is going to be the next starting quarterback?

Heading into fall camp, the answer to that question is still not crystal clear, with three quarterbacks each in contention for the job.

With the first practice of fall camp now just six days away, Stitt and his staff are faced with replacing an incumbent QB for the first time following the graduation of two-year starter Brady Gustafson.

In his tenure, Gustafson set a new school record for most completed passes in a game with 47 and finished his career with 4,809 passing yards, the eleventh-most of any quarterback in Montana history. Those are big shoes to fill.

But Stitt believes that after each showed promise during spring drills, his three quarterbacks – Reese Phillips, Caleb Hill, and Gresch Jensen – all have what it takes to lead the team this season if their number is called.

On paper, Stitt agrees that Phillips has a leg up on the competition. The Kentucky transfer has spent the most time in UM’s system in his two years and is the only one to play a game in Washington-Grizzly Stadium. But don’t consider the position battle won just yet.

“Each one of them should know they have a chance to be the guy,” said Stitt.

The question now becomes what has each player done over the summer to separate himself from the pack? It won’t take long for the coaching staff to find out when camp arrives.

“The way we install the offense, we throw a lot on them in the early days and let them run with it,” said quarterbacks coach and former Griz signal caller Andrew Selle.

“They all had their moments in spring, and I’m really excited to see what kind of work they’ve done this summer and how prepared they are come day one of fall camp. It’s going to be a heated battle.”

As the only senior QB on the squad, Phillips is considered the frontrunner in the QB horserace. In four games of action last year, he threw for 50 yards on 8-15 passing, but he is also the only QB on the squad to see playing time in the SEC.

Phillips has worked on his off the field capabilities during summer practices as well and has built a rapport with the other players on both sides of the ball to put himself in a leadership position.

“The players really like him. He’s worked very hard, his work ethic is there, and he’s taking the leadership role very seriously. He’s waited a long time to be in this position, and he’s very excited to take it on.”

Caleb Hill enters his first full season as a Grizzly after transferring from Blinn College in Texas. Standing at 6-4, the junior southpaw casts an imposing presence in the pocket to match considerable arm strength.

“He’s tall, athletic, and he can really run. He can hurt you with his legs, which is pretty exciting. As much man-to-man coverage as we get, if you have a quarterback that can take off and run, the defense sometimes isn’t prepared for it,” said Stitt.

Hill showed what he’s capable of in the spring game, throwing for a game-high 188 yards and three touchdowns to lead the white team to a 34-7 win in Butte.

“I hope he’s very confident coming into fall camp because he went into the spring game number three on the depth chart and played very well,” Stitt added.

Asa redshirt freshman, Jensen put his hand up as a candidate for the starting job early in spring ball, throwing for a pair of touchdowns in the team’s first scrimmage of the year.

“Gresch did a nice job in the spring of always being mentally prepared at practice,” said Stitt. “He’s probably ahead of where he should be as a redshirt freshman, which the coaches were very excited to see.”

“He’s just got to get more consistent,” added Stitt. “With him in the system for another year, I think we’re going to see him take some strides forward.”

The Griz will hold the team’s first scrimmage of fall camp just six practices into the year, and Stitt hopes to have the quarterback depth chart dialed in before that Aug. 14 hit-out.

“We’ll see how the first week goes and how prepared these guys are from the summer. Then we’ll start increasing and decreasing reps from there,” said Stitt.

“I’m expecting to see progress on the mental side of being a quarterback. The physical side of it is pretty darn good. We just have to get the ball where it needs to go.”