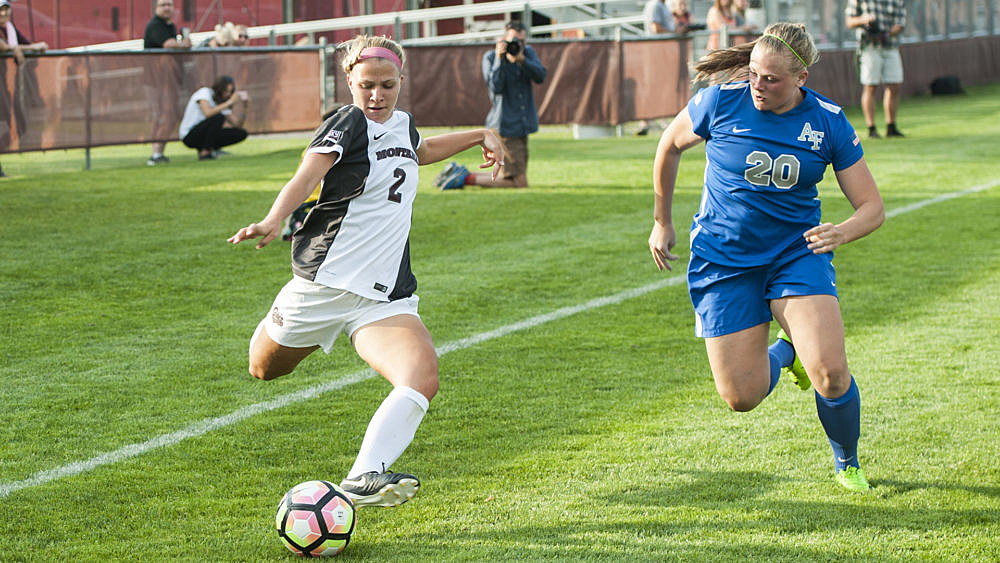 Kennedy Yost scored what would prove to be the game-winner in the 67th minute and Raye Burton added an insurance goal in the 85th as the Montana soccer team won its home opener on Friday afternoon at South Campus Stadium, defeating Air Force 2-0.

It was the first collegiate goal for both first-year players, and redshirt freshman Claire Howard made a pair of saves in goal for her second shutout of the season.

“We tell our freshmen when they come in that we don’t care that they’re freshmen,” said UM coach Mark Plakorus. “They’re on the field to play the best they can and give us everything they have, and these kids do that. I was really happy for them.”

Montana finished last week’s road trip to Boise State and Utah State with a 1-1 record but without a goal scored. The Grizzlies defeated the Broncos 1-0 last Friday courtesy of an own goal.

After taking 18 shots in two matches on the road, Montana peppered the Air Force defense with 17 on Friday, five of them on goal.

But it took more than 66 minutes of back-and-forth play before the Grizzlies broke through with their first goal of the season.

“It’s always good to score, especially when you play well,” said Plakorus. “The hardest thing in this sport is to score goals, and we’re still trying to figure it out.

“We got better at it today and scored two really good goals. That should give us a lot of confidence going forward.”

Yost, a redshirt freshman who spent last fall at Colorado, opened the scoring at 66:46 when she took control of a long pass from freshman defender Taylor Hansen 30 yards from goal.She stopped on a dime at the top of the box to free herself of her defender, then went left foot inside the left post, a goal-scorer’s goal.

She stopped on a dime at the top of the box to free herself of her defender, then went left foot inside the left post, a goal-scorer’s goal.

“I cut it, looked up and saw the keeper and tried to slot it,” said Yost. “I saw she was in the middle, so I pushed it to the far post.

“We’re psyched. It was our opening game and a lot of people were here, and we won. We couldn’t ask for anything more.”

Burton made it 2-0 late in the game when she won a 50-50 ball near midfield and took off down the center of the field. No one played her, so she stopped 25 yards out and touched a shot over the keeper and under the crossbar.

“Then in the second half it was coming. When we got it, it was great. Then Raye put another one in. We just want to keep it going.”

After a scoreless first half, Air Force changed tactics to start the second and managed to frustrate Montana. The Grizzlies were whistled for five fouls in the opening nine minutes of the second half and were issued a yellow card.

Despite good possession and some dangerous looks, the Falcons were kept off the board. After weathering the storm, Montana took control.

“We expected them to come out hard in the second half,” said Plakorus. “They adjusted their system a little bit to try to stop what we were doing, and it took a little bit to figure that out and find a rhythm.

“I’m really proud of the girls that they battled and really defended well when we needed to and got back hold of things and took over the game.”

Montana outshot Air Force 17-13 and had a 5-1 advantage in corner kicks. Burton took a team-high five shots, with Yost totaling three off the bench.

The Grizzlies will face a good San Jose State team at 1 p.m. on Sunday. The Spartans had their way with Big Sky Conference preseason favorite Eastern Washington in Friday’s early game, winning 3-0.

“The Sunday game itself is always tough, when you have to come back less than 48 hours later and have to play again,” said Plakorus. “They are a very athletic team, very well organized with really good players. We’re going to have to be at our best.”

Eastern Washington will play Air Force at 10 a.m. on Sunday.