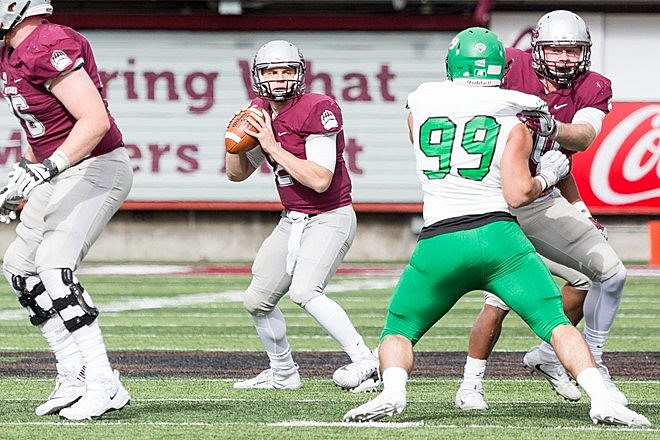 In his short tenure as Montana’s starting quarterback, Gresch Jensen has led the Griz to three-straight wins and put up numbers that have ranked among the best in Grizzly history, and national selectors have been paying attention.

Jensen has turned heads this season since filling in for injured senior Reese Phillips, throwing for 1,630 yards and earning four honorable mentions for the STATS FCS Freshman Player of the Week award in the last five weeks.

Now he’s in the running to be the national freshman of the year.

Jensen was placed on the 2017 STATS FCS Jerry Rice Award watch list for the Freshman of the Year on Wednesday by the FCS newsgathering service.

“This is a great honor for Gresch and a real testament to how well our team as a whole is playing right now,” said head coach Bob Stitt.

Jensen is one of 17 players nominated for the award named for the Hall of Fame wide receiver that has been presented to the top freshman in the FCS since 2011.

The Auburn, Wash. native is the second Montana player in two years to be put on the list. Receiver Jerry Louie-McGee finished seventh in voting for the 2016 Jerry Rice Award, despite missing three games to injury.

Since getting his first start against Eastern Washington, Jensen has found his stride quickly, passing for the most yards ever for a freshman QB at Montana against North Dakota with 423.

“He’s done a great job for us,” said Selle, himself a former Grizzly QB. “In his first start, it was a big game, and we came out on the losing end, but since then he’s done a great job of managing us on offense, making plays, getting the ball in our guys’ hands and getting three big wins.

“He’s going to continue to get better, so this is great news for him.”

Not only has Jensen been efficient through the air with a 61.2 percent completion average and over 1,600 yards in the air, he’s also shown no fear as Montana’s third-leading rusher with four touchdowns and 115 yards on the ground.

That kind of fearless attitude is spreading among his teammates too.

“I think the guys embrace his attitude and understand it,” added Selle. “The team has kinda taken on that persona a little bit too. They understand how aggressive Gresch is and the type of player he is and they rally around him.”

Despite only starting four games, Jensen is already ranked in the top 30 nationally in passing touchdowns and points responsible for with 17 TDs on the year.

He’s also carrying the Big Sky Conference’s third-best passing efficiency on the season at 155.5. But since the beginning of league play, he’s put together the second most total offensive yards and passing yards per game.

Jensen is the only player from the Big Sky Conference to earn a nomination for the Jerry Rice Award and has the second-most passing yards among the other nominees behind Mercer’s Kaelan Riley (1,726).

A national panel of over 150 sports information and media relations directors, broadcasters, writers and other dignitaries will vote on the STATS FCS Jerry Rice Award for Freshman of the Year following the regular season.