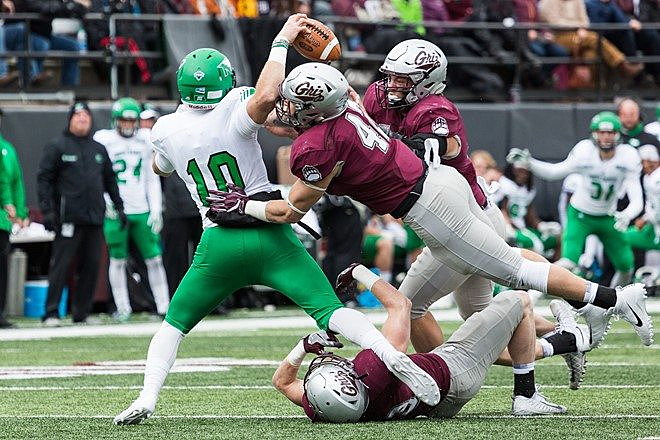 Fresh off a mid-season bye week, the Montana Grizzlies return to the field Saturday rested, rejuvenated, and ready to enter the business end of the 2017 schedule. And the Griz will need to get right down to business, too.

With an extra week of preparation for the Wildcats and a few days to recuperate banged-up bodies, the Grizzlies are looking to finish the season strong in Ogden.

Montana is riding a wave of momentum with a three-game win streak. Two of those three-straight wins came on the road as well, giving the Grizzlies a new identity as a band of road warriors, an identity that will be put to the test by the Wildcats.

While the game at Weber is not technically a must-win when it comes to playoff eligibility, it takes on the tenor of a must-win with three of the most challenging games of the season still to play.

“We talked a lot about playing a whole season all winter,” said head coach Bob Stitt.

“It’s going to be fun to go out and prepare this week and get our guys ready to go on the road to prove, you know, can we win three in a row on the road? That’s a big deal, especially at a place like this.”

Kickoff from Stewart Stadium is set for 2:07 p.m.

THE GAME: Saturday’s game will go a long way toward unclogging a traffic jam near the top of the Big Sky standings, with five teams that have only one conference loss, and four teams tied at 3-1 in league play (Northern Arizona remains the Big Sky’s only unbeaten team at 4-0). With the exact same 5-2, 3-1 record, Weber State’s season has panned out similarly to Montana’s.

Like the Griz, Weber’s schedule includes an expected win over an outmatched opponent with a 76-0 walloping of Montana Western. And like the Griz, the Wildcats have a loss to a Pac-12 opponent, falling 33-20 to the Cal Bears in Berkeley.

WSU’s nonconference schedule also included a win over Sacramento State, one of the surprises of the Big Sky season, who are also in the tie for second with a 3-1 league record.

Weber’s only conference loss came two weeks ago at home against the upstart Southern Utah Thunderbirds, who, after defeating Eastern Washington last week, are in the mix at 3-1 as well.

The similarities end there, however, as the Wildcats enter the game with a pro-style offensive approach and a league-best pass defense that has allowed opponents to throw for only 188 yards per game.

“They’re a good team. Very good team,” said Stitt. “The thing you notice is how well coached they are.”

Cantwell is averaging just over 200 yards-per-game passing and leads a Wildcat attack that averages almost as much on the ground as they do in the air at 179 yards-per-game led by running back Treshawn Garrett’ 63-yard average.

“Offensively they’re very balanced. They’ve got a good running back and good run game. They want to run the ball, but their passing game is going to compliment what they do in the run game,” said Stitt. “The quarterback can hurt you with his legs, and that’s scary.”

To combat Weber’s versatile offense, Montana’s D-line and Grizzly linebackers James Banks and Josh Buss, who rank second and sixth, respectively, in the Big Sky in tackles will be relied on to stop the run-heavy attack. The Griz have the fifth-best rush defense in the league, allowing an average of 159 yards-per-game.

Weber’s defense has been nothing short of outstanding this season, allowing just 23 combined points in their three Big Sky wins to date.

“They’re very similar to North Dakota as far as what they do, 4-3 personnel. They’re really physical up front, they’ve got some good players up front… And they’re very athletic in the back end too,” Stitt added. “They have the ability to do some different things, but they’re good.”

Led by freshman standout Gresch Jensen, the Griz are averaging nearly 40 points per game coming out of the bye week, posting nearly 335 yards-per-game in the air, making for an intriguing and important Big Sky matchup.

WHERE TO WATCH: This week’s Griz game will be broadcast live on ABC Montana stations statewide, except for the Billings market, where the game will be shown on SWX.

Live outside of Montana? You can stream the game for FREE at WatchBigSky.com or via the Pluto TV app on your phone, tablet or over the top devise attached to your TV.

Pregame coverage begins at 2 p.m., with kickoff from Stewart Stadium at 2:07. Chris Byers, former Griz QB Grady Bennett and former Griz head coach Mick Delaney will provide the play-by-play and analysis from the booth, with Shaun Rainey reporting from the sidelines.

LISTEN & FOLLOW: “Voice of the Griz” Riley Corcoran will have the radio call of Saturday’s game against WSU, supported by long-time color commentator Greg Sundberg in the booth. Fans can tune-in to the flagship station of Grizzly athletics, KGVO 98.3 FM and 1290 AM in Missoula, or statewide on the Montana Grizzly Sports Network. Fans worldwide can stream the radio broadcast of the game at GoGriz.com, via the official Grizzly Athletics mobile app, or via TuneIn.com and the TuneIn app.

SERIES HISTORY: The Montana/Weber State rivalry dates back to the year before the Big Sky Conference was founded in 1962. Since then, the two original members of the league have played 54 games, with the Grizzlies holding a commanding 40-14 advantage. In games played in Ogden, the Griz lead the series 18-7.

But Stewart Stadium has not always been a happy hunting ground for the Griz. In the last decade, Montana has only played in Ogden three times and is 1-2 against the Wildcats on their home field.

Despite the long history of the Griz/Wildcat rivalry, Saturday’s game marks the first visit to Ogden for UM in five years, with the last meeting in the Beehive State occurring in 2012, a 24-21 win for the Griz.

LAST MEETING: The Grizzlies will head to Ogden this week with a degree of revenge on their minds from the memory of an overtime loss to the Wildcats two seasons ago in Missoula.

In 2015, the Griz were riding high after two-straight wins over Northern Arizona on Homecoming and UC Davis on the road (not to mention a season-opening win over North Dakota State) when WSU came to town.

Montana rallied from a 21-14 halftime deficit to force overtime with the Wildcats, but a 27-yard field goal from Josh Kealamakia broke Grizzly hearts and broke a 13-game losing streak for WSU at Washington-Grizzly Stadium with a 24-21 victory.

The Griz were forced to activate then-third string quarterback Makena Simis after starter Brady Gustafson‘s replacement Chad Chalich went down with an injury in the first half.

Simis completed eight passes for 109 yards and threw a touchdown in the fourth quarter to Ben Roberts to tie the game, but the Griz couldn’t seal the deal as Weber kicked a field goal in OT to take the upset win in Missoula.

IN THE POLLS: Despite not playing last week, the Griz dropped in the national polls following a week of upsets around the FCS.

Montana fell from 21 to 24 in the STATS FCS national media poll with 634 votes, and fell out of the FCS Coaches’ Poll all together, down to No. 27 with 56 votes.

The logjam at the top of the Big Sky standings caused Weber State to drop out of the STATS FCS media poll from No. 23 to No. 27, but the Wildcats hang on to the No. 22 spot in the Coaches’ poll. Weber had been ranked as high as No. 18 on week six of the season in the media poll.

Other ranked Big Sky teams include Eastern Washington, down to No. 14 after a loss at Southern Utah last week, causing the Thunderbirds to jump into the rankings at No. 25. Northern Arizona sits just out of the Top-25 at No. 26 with 532 votes, one spot ahead of Weber.

GET IT WHILE THE GETTIN’S GOOD: One of Montana’s points of pride this season (and a point of emphasis during the offseason) is finding success in the red zone.

With 31 scores on 32 attempts, the Griz are the No. 1 team in the FCS inside the opponent’s 20, and with a .969 conversion percentage, only five teams in all of D-I football (FCS or FBS) are converting at a better rate.

FOUR DOWNS WITH THE WILDCATS:

Weber will honor their 1987 team, the first in WSU history to put together 10 wins and advance to the D-1AA (FCS) playoffs. The ’87 team will be honored at halftime, and the current squad will wear the “flying W” logo on their helmets, a throwback to the ’87 team. That team’s coaching staff included Mike Zimmer (current head coach of the Minnesota Vikings) as the defensive coordinator, current Louisville Head Coach Bob Petrino.

Weber’s secondary came up big in last week’s win over Cal Poly, forcing three turnovers in the fourth quarter with three interceptions on three-straight possessions. Freshman linebacker Cameron Mortensen picked off a Mustang pass at the goal line early in the first quarter for his first interception. On the next Cal Poly possession, senior Xequille Harry then had his second career interception. Finally, senior Taron Johnson had his fourth career pick with 3:20 left in the game to seal the win.