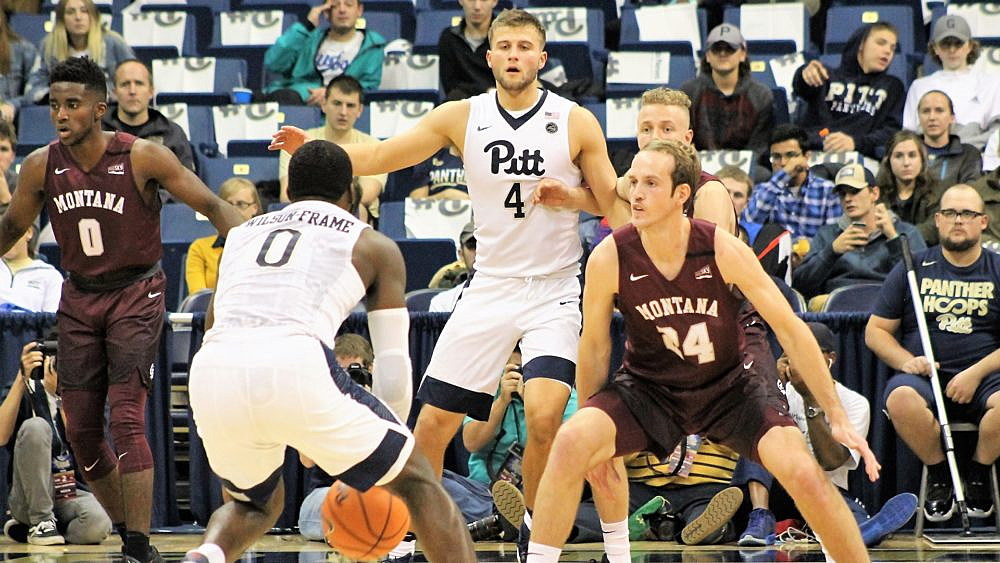 The Grizzlies had been in this situation before, several times in fact. Hanging tough on a big-name opponent’s home court, and even leading. In previous instances – at Cal and Gonzaga three years ago and at USC and Ole Miss last year, just to name a few – Montana couldn’t get over the hump to earn a signature win.

“There was a sense of, ‘Here we go again,'” head coach Travis DeCuire said after the game. “But the message was, ‘Let’s make it happen. Let’s go find a way to win this game.'”

That they did. It wasn’t a perfect game, but it was pretty good. The Grizzlies out-rebounded Pitt, forced 19 turnovers and made the plays when they needed to. Trailing at the end of both periods, they went on runs to close both halves – a 16-7 run in the first half to go into the locker room with a lead and a 10-2 run in the second half to go up by two, eventually settling for overtime.

Then, in the extended period, Montana limited Pitt to 22 percent shooting en route to the elusive victory that the program has been searching for.

“We never got down,” DeCuire said. “We never gave up, we just kept fighting.”

Montana had lost 14 consecutive games against Power-5 opponents prior to its win over Pitt – a team from the ACC that has been to the NCAA tournament in 13 of the past 16 seasons. The victory was Montana’s first over a Power-5-conference team since defeating Oregon State in 2010.

DeCuire said afterward that the win is a partial arrival. The victory is huge, but means little if the team doesn’t use it as a springboard into the rest of the season, especially in March. The Grizzlies will get an opportunity to take the next step right away, as Montana travels to Penn State on Wednesday evening for the second of four games in the Legends Classic.

Penn State, from the Big Ten, is better than Pitt. The Nittany Lions are 2-0 on the young season and feature one of the best defenses (Penn State ranks seventh nationally for steals) and one of the best young guards (sophomore Tony Carr is averaging 26.5 points per game and ranks in the top 30 nationally for points and assists).

“Once again, you’re talking size and athleticism,” DeCuire said about Penn State. “Carr can go for 20, 30 every night and has the ability to score and get in the paint. In the post, from the 4 and the 5 positions, they’re athletic and long. We have to keep them from getting second shots and have to make them play at our pace. If we do that, we’ll have a chance.”

Montana has already made a statement. Now the Grizzlies want to make another.

Tipoff is slated for 5 p.m. MT and will be televised on the Big Ten Network. Those with cable packages that include the Big Ten Network can also stream the game at www.BTN2GO.com and on the BTN2GO app. Voice of the Griz Riley Corcoran will also have the call on 98.3 FM in Missoula and online.

SERIES VS. THE NITTANY LIONS
Montana and Penn State have never before met on the hardwood. Montana is 3-14 all-time against current members of the Big Ten, beating Nebraska in 1959-60 and 1982-83, and Minnesota in 2006-07. Montana is seeking its first win on a Big Ten opponent’s home court.

STARTING STRONG
Montana is off to its first 2-0 start to a season since the 2009-10 squad began the year with three con-secutive wins. That team finished with a 22-10 record, winning a Big Sky championship and advancing to the NCAA tournament.

SWINGING THE MOMENTUM AT PITT
Montana led for nearly 24 minutes against Pitt (Nov. 13), including by as many as seven points. Below are a couple key stats that led the Grizzlies to victory: