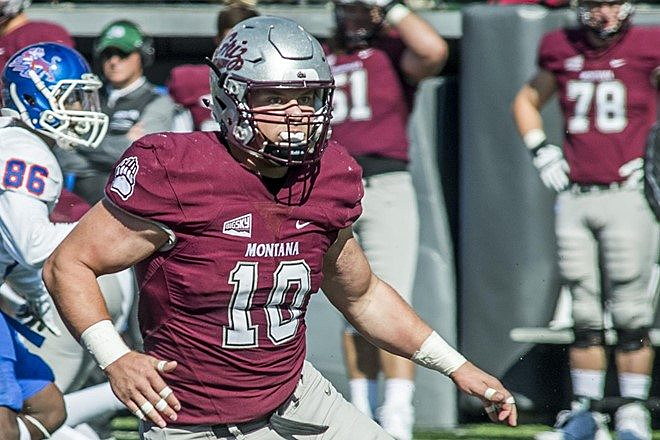 With one of the top quarterbacks and overall offenses in FCS football paying a visit to Washington-Grizzly stadium last week, it was no question that Montana’s defense was going to have to step up in a big way.

Defensive coordinator Jason Semore knew that, so he challenged the Grizzlies to put on a “superhuman performance” against the potent NAU attack, and one player in particular answered the call.

With a career-high 16 tackles, a sack, 2.5 TFLs and a forced fumble that led to a Grizzly touchdown just three play later, senior linebacker Connor Strahm‘s superhuman performance has earned him a pair of weekly honors.

“He put the team on his shoulders and played as hard as he could for as long as he could,” said Semore. “He went out there on a mission, and had a great game.”

Strahm, one of three Grizzlies out of Sheldon High School in Eugene, Ore., had nearly double the number of tackles of any single Lumberjack, and his forced fumble was a game changer.

Against NAU, he eclipsed his previous career-high mark of 14 tackles set in October at Idaho State for his third double-digit tackle total of the year. Despite missing the first two games of the season to suspension, Strahm is now the third-leading tackler on Montana’s defense with 62 total takedowns.

When facing a two-game suspension, lesser players may have recoiled back into their shells, but not Strahm. For Semore, Strahm’s suspension just stoked the fire that is his love of football.

Since earning the team’s Golden Helmet award in 2015, Strahm has always been a team leader. Now he is a team leader with a wider perspective and appreciation for the team’s big picture.

“He’s a dude that loves football and loves competing, he’s very passionate and was born to play this game. But where Connor has grown is now he’s a dude that really cares about his teammates and really wants to win and be successful,” said Semore.

“His suspension was something of a blessing at the end of the day because he’s handled it the right way, and he’s become a lot better player because of it, in my opinion.”

Strahm and the Grizzlies return to action this Saturday for the final regular season home game of the season, hosting the Northern Colorado Bears, facing a must-win situation to keep their playoff hopes alive.