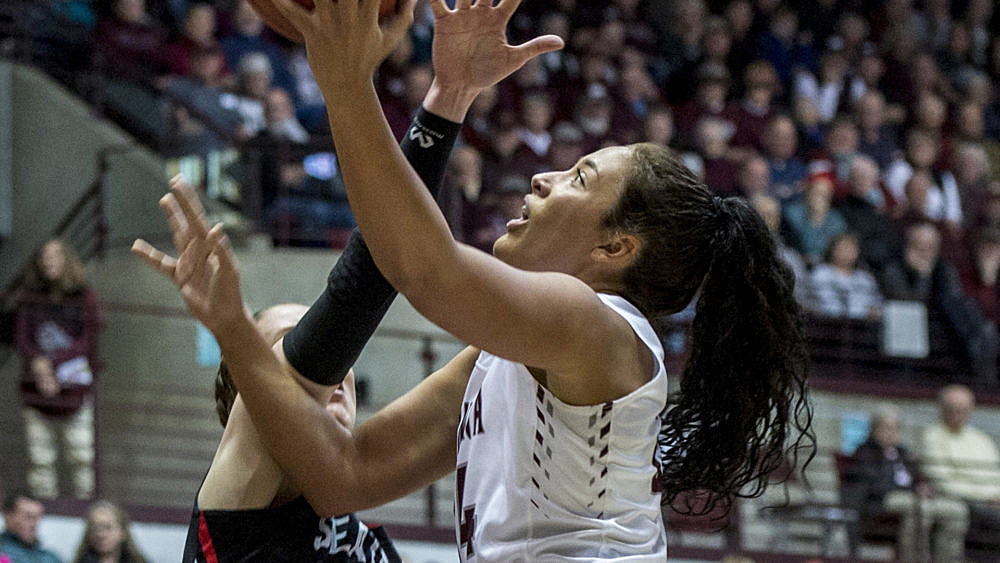 Amidst the carnival atmosphere of the first Lady Griz School Day — the crowd of 7,018, most of them students, was more festive than hostile — Seattle made itself right at home.

The Redhawks, who shot better than 45 percent for the game, used a 14-0 run early in the fourth quarter to turn a 53-51 deficit into what would be a 78-64 victory over Montana on Wednesday afternoon at Dahlberg Arena.

“This was not only a great environment for us but for them as well, so we knew they’d be fired up to come in here and play,” said coach Shannon Schweyen.

The 14-point scoring outburst in the fourth quarter was a microcosm of Seattle’s overall performance. Alexis Montgomery and Jacinta Beckley both hit 3-pointers, and point guard Kamira Sanders got into the paint at will for six points.

Montgomery, the WAC Preseason Player of the Year, finished with 22 points and 11 rebounds, Beckley went 5 for 11 from the arc and finished with 17 points, and Sanders filled it up with 19 points, eight rebounds and seven assists.

That was more than enough to overcome both the crowd and a Montana team that struggled to shoot the ball from anywhere outside the paint.

“They are a talented group. They were in the (WNIT) last year. They were picked second in their conference. They have the WAC Player of the Year in Montgomery,” said Schweyen, whose team had held its previous four opponents to 55 points per game.

“We had a hard time stopping them. They were knocking down threes, and they are just so quick to get to the hole on you. You have to pick your poison in what you want to stop.

Jace Henderson finished with 15 points and 13 rebounds, both careers highs, to record her first career double-double, and she was Montana’s highlight on a day when the Lady Griz struggled with both their perimeter shooting and their passing.

Henderson scored three of Montana’s first four baskets but her teammates could only match her, putting down three themselves in the first quarter, and Montana trailed 21-15 at the first break.

“I felt like we executed well enough to get good shots. We got plenty of good looks from the perimeter,” said Schweyen.

“It was such a bummer that we couldn’t get it going a little bit more or have somebody get a hot hand. It would have been fun to get this place roaring if we could have hit a couple in a row.”

Montana looked out of sync for most of the game on the offensive end. Open shots were missed, which happens, but on this day, the passing at times broke down.

The Lady Griz only turned the ball over 11 times, but that’s a deceiving number. It doesn’t factor in deflections that had Montana oftentimes scrambling to get reset and find good looks.

“That was the story of the day. Our passing just wasn’t there today,” said Schweyen. “We were passing it right to them.

“Pass and catch. As simple as that is, we had a hard time with that today. But credit them. They are active and deflect a lot of passes.”

A back-and-forth third quarter, when neither team held a lead of more than three points, led to McKenzie Johnston draining a 3-pointer on the opening possession of the fourth quarter to put Montana ahead 53-51.

That’s when Seattle, which outscored Montana over the final nine minutes 27-11, went off.

Montgomery gave her team the lead for good with a 3-pointer that made it 56-53, followed by Sanders scoring six straight points on three baskets from close range.

“She’s tough to close out. That’s why we started in zone initially, just knowing how well they get to the hole on people,” said Schweyen.

Nora Klick ended Montana’s nearly five-minute scoring drought with a 3-pointer that gave the Lady Griz a faint glimmer of hope, but Beckley was having none of it. She answered right back with her fifth triple of the game, the dagger.

“We definitely left her way too many times. We gave her some really good looks,” said Schweyen. “They’re a good ball club and knocked down shots when it mattered. They made a big run, and we couldn’t answer it.”

Montana missed five straight shots as Seattle was pulling ahead and turned it over twice. The Lady Griz shot 36.2 percent — the Redhawks finished at 45.6 percent, including 11 for 25 from the arc — and went just 6 for 23 from 3-point range.

“I felt like we executed well enough to get good shots. When they went zone, somebody needed to make a shot if we were going to stay in a game like this and match them,” said Schweyen.

Henderson finished with a double-double on 7-of-12 shooting. She added three assists and two blocks, and is evolving into a player who does hardly anything to hurt her team when she’s on the court.

“It was a great game by her,” said Schweyen. “It’s nice to know you’re going to look at the stat sheet and see positive numbers.”

Johnston finished with 12 points, six rebounds and five assists, while Hailey Nicholson and Sophia Stiles both added eight points off the bench.

While the 7,000-plus fans didn’t see a Lady Griz win, they did see an entertaining game. There were 19 lead changes and the score was tied 11 times before Seattle pulled away late.

“With the conference tournament not being at a home site anymore, it’s rare to see a big crowd like this. It was incredible and such a positive thing for the young kids who were here.”

Montana will wrap up its nonconference schedule with a home game against Rocky Mountain next Wednesday night.