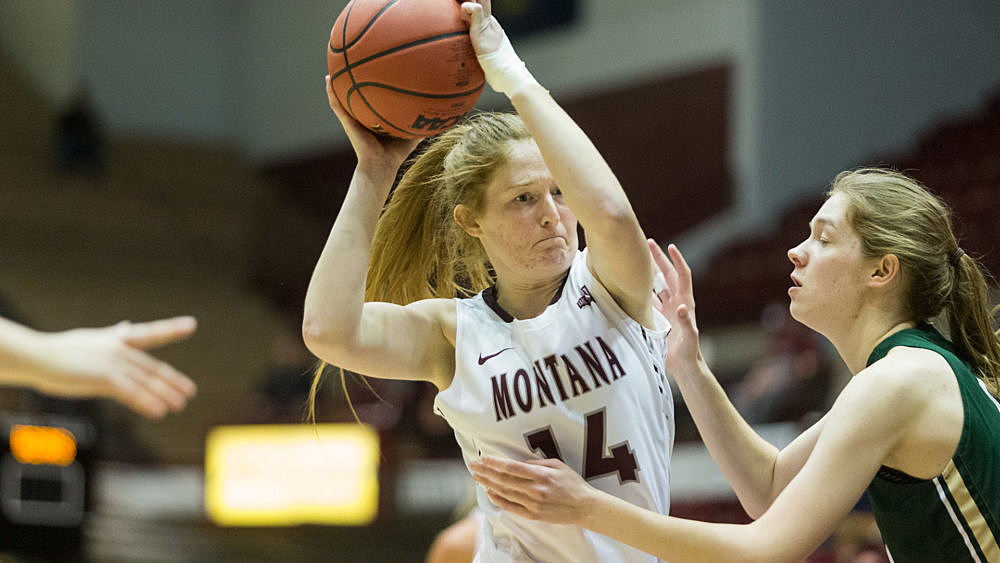 The Montana women’s basketball team will open the Big Sky Conference portion of its schedule this week with home games against Northern Arizona and Southern Utah.

The Lady Griz will host the Lumberjacks on Thursday at 7 p.m. and the Thunderbirds at 2 p.m. on Saturday.

It marks the first of 10 weeks of league games for Montana, 18 games in all counting the two single-game weeks against Montana State.

The Big Sky tournament will open in Reno on Monday, March 5.

Coverage: Because of conflicts with the Griz men’s basketball tip times, both games this week will air on KMPT AM 930, with Tom Stage and Dick Slater. Streaming will be available through WatchBigSky.com and Pluto TV, channel 237.

Montana is 4-7, with three Division I wins. The Lady Griz snapped a two-game losing streak with a 54-38 home win over NAIA Rocky Mountain on Wednesday night, but it wasn’t as easy as anyone would have liked. The teams were tied 25-25 at the half before Montana pulled away in the third quarter.

Northern Arizona, under a first-year coach in Havre native Loree Payne, is 3-8 and enters league on a four-game losing streak. Five of the Lumberjacks’ eight losses have been by nine points or fewer. NAU has a neutral-site win over Mountain West favorite Boise State and a home win over Arizona.

Southern Utah is 1-10, its only win a 70-67 home victory over now 2-9 Utah State. The Thunderbirds, who play at Montana State on Thursday night, go into league on a seven-game losing streak. Seven of SUU’s 10 losses have been by eight points or fewer, with overtime losses at BYU and Arizona.

Where they rank: Northern Arizona, among the three teams, had the best ranking in Tuesday’s GoGriz.com Big Sky Conference pre-league power poll at No. 6. Montana checked in at No. 9, Southern Utah last at No. 12.

Five things to know about Montana:

1. The Lady Griz enter league without a lot of momentum, but they do have the Dahlberg Arena advantage. Montana is 262-35 in home conference games dating back to 1978-79. Even in last year’s seven-win season the Lady Griz went 4-5 in home league games.

3. Outside of giving up 78 points to Seattle on Dec. 13, Montana’s defense in December has been salty. In the team’s other five games this month, no opponent has scored more than 61. The 38 given up to Rocky Mountain on Wednesday were the fewest since MSU Northern scored 32 in 2015-16.

4. Montana is shooting 37.2 percent for the season, up from the 35.1 the Lady Griz struggled to hit last year. That ranks 10th in the Big Sky, ahead of only Sacramento State and Southern Utah, and is a big reason Montana is only averaging 59.5 points. And sitting 4-7.

5. The Lady Griz rank last in the Big Sky in 3-point shooting, at just 23.6 percent, which ranks 336th nationally. Not that that means everything. Gonzaga, at 7-4, is a pretty good team, and the Bulldogs rank 339th from the arc this season at 23.2 percent. Of course Jill Barta overcomes that with her work inside.

1. The Lumberjacks are on their third coach in six years. Hunch: This one is going to be really good. Loree Payne played at Havre High, was a two-time first-team All-Pac 10 player for Washington and went 130-58 in seven seasons at the University of Puget Sound.

2. Northern Arizona’s record may not impress you, but there are some things to like, especially its 1.14 points per possession, which is really good. Compare Montana, which is at 0.91 for the season. With an average game having 60-70 possessions per team, that quarter of a point is big.

3. NAU’s is no Sacramento State offense. Or defense. Northern Arizona is limiting its opponents to 38.0 percent shooting, the second-best mark in the league behind Idaho State. While the scoring defense won’t impress you (75.5/g), NAU has scored one fewer point this season (830) than it’s allowed (831).

5. Montana leads the all-time series against Northern Arizona 54-11 and is 31-3 against the Lumberjacks in Missoula.

1. Since winning a share of the regular-season Big Sky championship with North Dakota in 2013-14, in JR Payne’s final season as coach, Southern Utah has gone 10-44 in league games, finishing in the bottom three in the standings each of the last three years under coach Chris Boettcher.

2. Either Southern Utah is going to eventually start surprising some people this season — seven losses by eight points or fewer? — or its offensive woes will continue to extend the team’s close-but-not-quite-good-enough narrative the next two and a half months.

4. Senior center Whitney Johnson and junior guard Breanu Reid both average 11.0 points per game, with Johnson leading the team at 6.6 rebounds per game. On a team that is struggling to shoot the ball, Johnson is connecting at 44.3 percent.

5. Montana leads the all-time series against Southern Utah 14-1 and has never lost to the Thunderbirds in Missoula, going 7-0.

In last year’s game at Dahlberg Arena, a 64-55 Montana win that snapped the team’s 13-game losing streak, the Lady Griz led for all but 57 seconds. Four starters scored 10 or more points, with McKenzie Johnston filling it up with 19 points, 10 rebounds and six assists.

* As promised, the GoGriz.com pre-league power poll was announced on Tuesday. Northern Colorado, the Big Sky preseason favorite of both the coaches and media, was slotted first, followed by Idaho State and North Dakota.

* The mid-season Coach of the Year? Idaho State’s Seton Sobolewski by a pretty good margin. The Big Sky Player of the Year is a tougher decision. It’s hard not to like what North Dakota junior forward Lexi Klabo is doing. In a league that is guard-heavy in talent, Klabo is averaging 19.5 points and 9.5 rebounds.

* Once league play begins on Thursday, the dust won’t settle until the regular season concludes on Friday, March 2. Teams will then make their way to Nevada for the final edition of Big Sky tournament being played in Reno. Next year Boise begins its three-year run as host.

* Non-Montana game to monitor: North Dakota at Idaho. Teams with opposing styles of play meet in Moscow. The Vandals rank ninth in the nation in 3-pointers made per game at 9.9. The Fighting Hawks, who only attempt 17 triples per game, would be just fine scoring every basket it makes in the paint.

Upcoming: Montana goes on the toughest road trip on the Big Sky schedule, both for travel and the opponents to be faced, when the Lady Griz play next week at North Dakota and Northern Colorado.