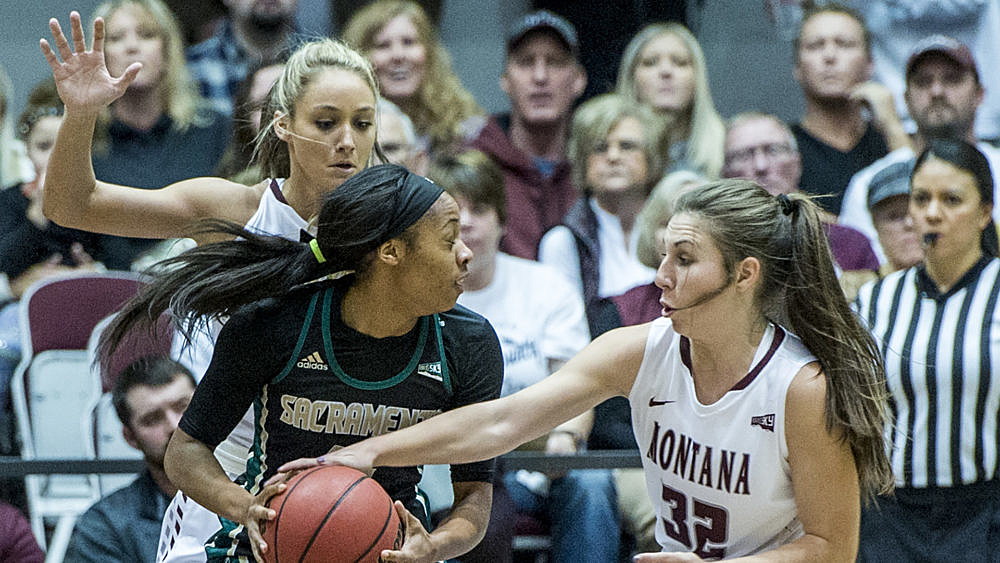 Define it however you want. A heated game against an in-state rival. A matchup against a team that features the league’s top player. A game against the defending conference champion.

But nothing defines BIG GAME for Lady Griz fans like a matchup of their team, usually one of the best in the Big Sky Conference, against another one of the top teams in the league.

With Montana dominating the Big Sky for decades, those games used to arrive each January and February with regularity. A challenger to the throne here, another one there, usually leaving with a loss in hand, with order — the Lady Griz at the top, everyone else chasing — restored

Those games have been few and far between the last few seasons, with Montana finishing 11th last season, fifth the year before. There were BIG GAMES taking place across the league, just not inside Dahlberg Arena. And it was missed.

To those fans’ credit, it hasn’t affected their attendance or devotion, but games have been lacking that certain … anticipation, that excitement that hits the moment the alarm clock goes off. It’s game day in Missoula. And it’s a BIG GAME.

Good news: It’s on its way back, and everyone should be feeling the BIG GAME vibe about Saturday’s matchup between Montana and Portland State, the two programs who a decade ago had the best rivalry in the Big Sky.

Despite a strong finish to last season — the Vikings made the semifinals of the Big Sky tournament in Reno — and four starters back, Portland State was mostly overlooked in the preseason polls, coming in sixth in the coaches’, eighth in the media.

In that respect, Portland State’s 3-1 start to its league schedule should be a surprise, but not to those who know. The Vikings have two 20-point scorers in Ashley Bolston and Sidney Rielly, plus two others — Kiana Brown and Kylie Jimenez — who average more than 10.

The Vikings are 9-6 overall, but their 2-5 start against Division I opponents came without Bolston, who missed the season’s first eight games with an injury.

Since her return, Portland State is 6-1, including Thursday night’s 69-60 victory at Montana State that snapped the Bobcats’ 31-game home-court winning streak.

Facing the Vikings’ zone defense, with bodies that clog the paint and limbs that appear to stretch to the 3-point arc, Montana State shot just 36.1 percent and scored its fewest points since early December.

Wanting to replicate what Idaho did last week when the Vandals went into Portland and won 101-90 — that being shooting 11 for 20 from the arc in the first half to get out to a big lead — the Bobcats went 2 for 16 from three in the first half and trailed the final 33 minutes of the game.

“Portland State is a really good team,” said UM coach Shannon Schweyen. “Their record is not indicative of what they are because Bolston was out such a large stretch of the season at the beginning.

“They’ve been playing well as of late and are proving to be one of the top teams in the league.”

It’s a team Montana struggled with mightily last season, losing by 20 at home, 23 on the road and shooting upper 20 percent in both.

The Lady Griz didn’t have an inside threat to challenge the zone and didn’t possess good enough outside shooting to do much damage either.

“Defensively they present problems for people with their size and their length. If you’re not somebody like Idaho who can drop threes on them, they are hard to score on,” said Schweyen.

It’s mostly the same Portland State team that played at Dahlberg Arena, but these are not the same Lady Griz. Last year’s matchup came in the middle of Montana’s 17-game losing streak to Division I opponents.

That team took those experiences and has both learned and grown from them. Since opening the season 0-5, Montana has won eight of 11 and has surprisingly opened league 4-1.

The Lady Griz sit atop the Big Sky standings, tied with Northern Colorado, which fell at Weber State on Thursday night, done in by Larryn Brooks’ 32 points and the Bears’ own Achilles. They went 4 for 22 from 3-point range, the common theme in all their losses this season.

Portland State and Weber State are tied with the league leaders in the loss column but are one win behind.

With both the Lady Griz and Vikings surging, that feeling you experience tomorrow morning will be familiar but still maybe a bit foreign as well, dormant as long as it’s been.

You’re not ill. You’ve just got a touch of BIG GAME fever. It probably started working its way into your system last night: Montana 68, Sacramento State 59. A win against another team that swept the Lady Griz last season.

Sure, the stakes are not as high as they used to be, when the regular-season champion would host the league tournament, but top-four spots in Reno and a bye to Wednesday’s quarterfinal round are today’s coin of the realm, and somebody’s pocketing a few riches on Saturday.

It’s not to be missed. It’s what BIG GAME Saturdays are all about. And they are making their return to Dahlberg Arena. “It feels like it’s a big one,” said Schweyen. She’ll be there. The Lady Griz as well. Will you be?