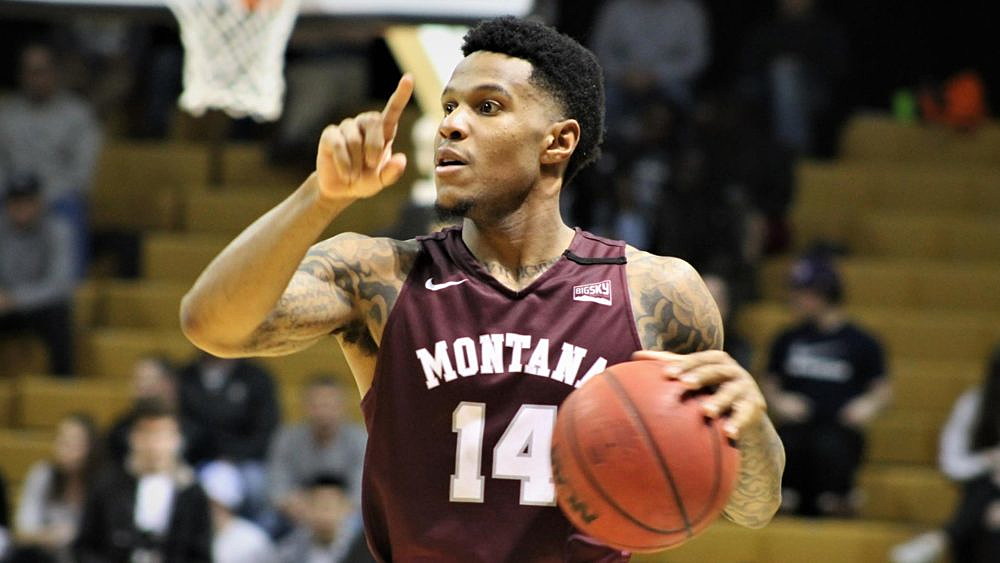 Billed as a heavyweight fight between two of the top teams in the Big Sky Conference, the only meeting between Montana and Idaho lived up to the hype on Saturday night. The contest featured 12 ties and 10 lead changes and wasn’t decided until the last second of overtime.

After Montana tied the game with 30 seconds left, Idaho was able to finish a tip-in off of a missed shot, just beating the buzzer to win 79-77.

“It was a game of possessions,” head coach Travis DeCuire said. “Over the course of a game, those possessions become points. When you lose by two, you reflect on each individual possession.”

To get to overtime, Montana closed regulation on a 9-3 run and held Idaho without a point for the final 2-plus minutes. The strong defense allowed the Grizzlies to rally and tie the score at 71-71. First came an incredible three-pointer from Ahmaad Rorie, as the shot clock was winding down, to cut the deficit to one. Then, after good defense on the other end of the floor, senior Fabijan Krslovic knocked down a free throw to knot the score at 71-71 with 46 seconds to play.

The Grizzlies got another defensive stop that allowed them to get two looks in the final seconds of regulation, but instead the game advanced to overtime.

Montana scored first in the extended period, with junior Michael Oguine hitting a pair of free throws to give Montana its first lead since the first 3 minutes of the second period. Neither team would separate by more than three points in the overtime period.

“We had some guys make some timely shots and get us back in,” DeCuire said. “We showed a lot of heart and passion to do that.”

Down two, Montana once again got a defensive stop and drove the length of the court, tying the game on a Rorie jumper in the paint. Just 30 seconds on the clock, it gave Idaho the chance to take the final shot.

With swarming defense, Montana prevented Idaho from getting the shot it wanted, resorting to a Brayon Blake floater as the clock was winding down. It was off the mark, but Nate Sherwood was there to tip it in under the basket as time expired.

Montana has now lost back-to-back games for the first time this season. Despite that, the Grizzlies still hold a half-game lead over Weber State in the conference standings. Weber State will visit Missoula in two weeks, but first is a showdown vs. Montana State next Saturday.

“It’s a tough place to win on the road, especially tonight,” DeCuire said. “I think if we play like we did tonight the next three games at home we’ll be fine. We’re still tied for first place, so I think we’re in a good spot.”

Montana was led by Rorie, who on the night eclipsed 1,000 career points. He is the 33rd member to join the club, and just the third player to do so in two seasons (also Martin Breunig and Anthony Johnson). Rorie finished with 21 points and four assists. Senior Fabijan Krslovic continued his torrid pace over the past month, notching 14 points on 5-of-8 shooting, in addition to a team-high seven rebounds.

Montana shot 47 percent from the floor but allowed the Vandals to convert on 52 percent of their shots, including 63 percent from deep. Montana was also out-rebounded, 31-28.

The Grizzlies did force 16 turnovers (nine steals), including a Krslovic steal and breakaway dunk with 8:16 to play that tied the game at 60-60 and completed a 10-4 run. Montana stayed within two possessions for the remainder of the game, cutting it to a one-point game with Rorie’s incredible three-pointer with 1:32 left in regulation, and tying the score with Krslovic’s free throw with 46 ticks remaining.

“I thought we did the best job in a while of fighting for loose balls and playing together,” DeCuire said.

Montana was called for seven fouls in the opening 9 minutes of the game, and trailed by as many as 10, 22-12. The Grizzlies responded with an 11-0 run, however, including back-to-back-to-back three pointers by three different players, to not only erase the double-digit deficit, but take the lead.

The Grizzlies extended the run to 23-9 to take a four-point lead late in the first half, and were tied going into the break. Montana opened the second half strong on offense, but Idaho was scorching, connecting on it first six shots – five of which were from deep. On the night, Idaho was 12-of-19 from three-point range.

Brayon Blake and Victor Sanders combined to score 48 points. Sanders shot 6-of-7 overall, including 4-for-4 on three-pointers, before fouling out early in the overtime period.

The Grizzlies will have a full week to prepare for Saturday’s tilt with the Bobcats. Montana’s final three games are at home, with the Grizzlies having full control over their regular-season title hopes

“If you told me at the beginning of the year that, going into the stretch, last three games at home, we’d be tied for first place, I’d take it,” DeCuire said.