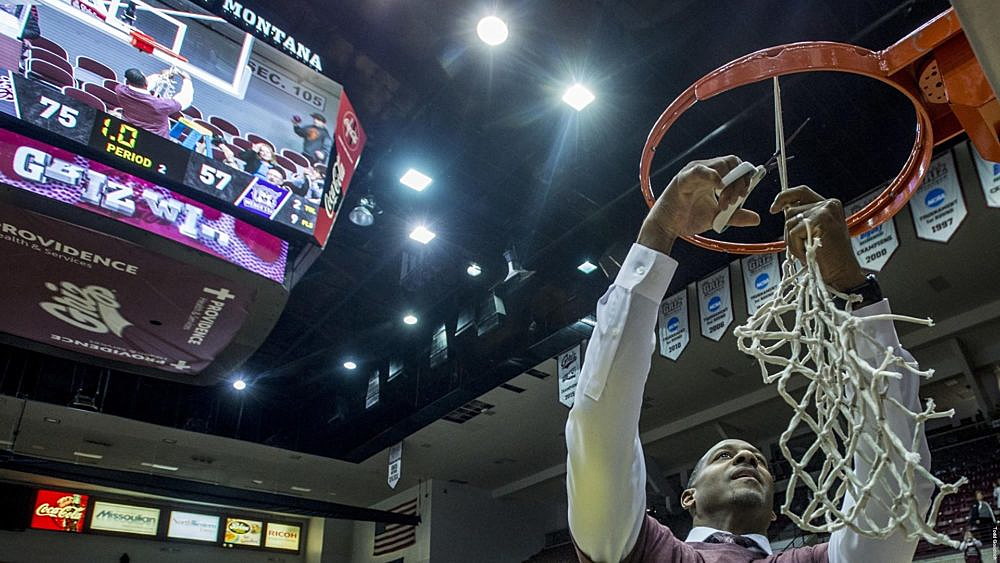 In 2015, Montana was predicted to finish eighth in the league’s preseason poll before going 14-4 to win a regular-season title and bring the conference tournament to Missoula. The coach-of-the-year award was shared by two coaches that season, neither of which was Montana head coach Travis DeCuire.

In 2016, DeCuire’s second in the league, he led Montana to one game from a second conference championship in as many seasons. Idaho State earned coach-of-the-year honors.

Now two years later, in 2018, the 11 other coaches had no option, really, but to name DeCuire the Big Sky Conference Coach of the Year. The award was announced Wednesday morning after voting was compiled by each head coach.

The coaches around the league made the right decision this time around.

With five of its top six scorers returning, there were high hopes for Montana entering the year. The Grizzlies were picked to finish third in the preseason poll – behind Idaho and Weber State. There was veteran returning talent, but there were also a handful of uncertainties.

Fabijan Krslovic was the team’s only senior. While Montana returned three of its four primary starters from a year ago, the team also lost as many letterwinners (five) as it returned. Of the 15 players on Montana’s roster, nine (60 percent) were either not on the team last year or were unable to play due to NCAA transfer rules. Things got tougher in November, when it was announced that Washington transfer Donaven Dorsey would miss the entire season with hip injuries.

Still, though, Montana bonded together and posted its first non-conference winning record in six seasons, including a win in an ACC venue. The team started to click in December and carried that over to January, where the Grizzlies won their first two conference games on the road before returning home to win two more. Two of the wins were by 30-point margins.

The Grizzlies then swept another road trip, this one more impressive because it came at Sacramento State and Portland State, two teams and locations that have given Montana fits in recent memory. The team followed that road trip up with revenge in Bozeman, knocking off the Bobcats to improve to 7-0 in league play. Five of the wins up to that point had come on the road.

One by one, Montana continued to knock off the competition, finding new ways to do so. There was another blowout of Southern Utah – holding the Thunderbirds to the lowest point total in the Big Sky this season (47) – a narrow escape of Sacramento State – knocking off the Hornets in overtime – and yet another road sweep – this time coming at Northern Colorado and North Dakota.

Even after suffering back-to-back losses in mid-February, Montana rebounded to win its final three games at home. The Grizzlies handed Montana State its second-largest loss in the century-old Brawl of the Wild to clinch a share of the conference title before taking down Weber State and cutting down nets afterward.

Through it all, DeCuire has been the constant, preaching for the team to enjoy the process and never get too high or too low.

While DeCuire was a worthy candidate to win coach-of-the-year honors in his first two seasons, 2018, his fourth, has been his best work yet.

The 13-game winning streak was one game shy of a school record. The seven consecutive road wins are a school record. Montana finished unbeaten at home this season for the first time since DeCuire was a player in 1992, and the fifth time ever. The Grizzlies enter the conference tournament with 23 wins, already tied for sixth in school history. Should Montana accomplish its goal this week and win the conference tournament before advancing to the NCAA tourney, it would become just the third team in school history to reach 26 wins.

He may not talk about it, but someone has to. Last month DeCuire became the fastest coach in Big Sky Conference history to reach 50 conference wins, needing just 65 games to do so. His current winning percentage is the third-best in the league’s history, and best among coaches with more than three years in the league.

Add that to a resume that already includes a 2015 banner and being the only coach in school history to win 20 games in his first two seasons.

Montana, playing as the No. 1 seed, will host North Dakota on Thursday in the quarterfinals.