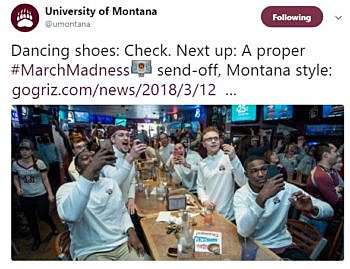 If the University of Montana men’s basketball team scores half as many points as it has mentions on social media, it’ll have the Michigan Wolverines beat handily in Thursday’s first-round tournament game.

As March Madness kicks off, social media has been in a tournament frenzy since Sunday when the brackets were revealed.

More than 605,000 mentions of March Madness, NCAA Tournament or related terms have been recorded across all social media platforms in the past week, according to Talkwalker, an international social media analytics firm.

Of those, the Montana Grizzlies have been mentioned more than 3,200 times, starting with a photo of the team celebrating its tournament bid. The police chief of Wichita, Kansas – where the Griz and Wolverines meet in the first round – tweeted his own photo of Montana’s arrival in his fair city.

With its 3,200 mentions, according to Talkwalker, the Griz are the 51st most popular team in social media. Only two of the four top-seed teams stand among social media posters’ favorites to win the tournament. 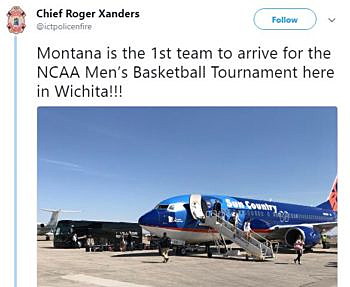 If you’re doing brackets and letting others handle your picks, the early leaders out of the gate for most mentions include one-seeded Kansas with 20,100 mentions, two-seeded North Carolina with 17,500 mentions and one-seeded Virginia with 16,8000 mentions.

Mentions of March Madness spiked over the last 72 hours, with 467,000 posts since tournament teams were finalized on Selection Sunday.

The biggest peak came around 5 p.m. during the CBS live selection show, with more than 74,000 social posts in that one hour referencing the tournament.