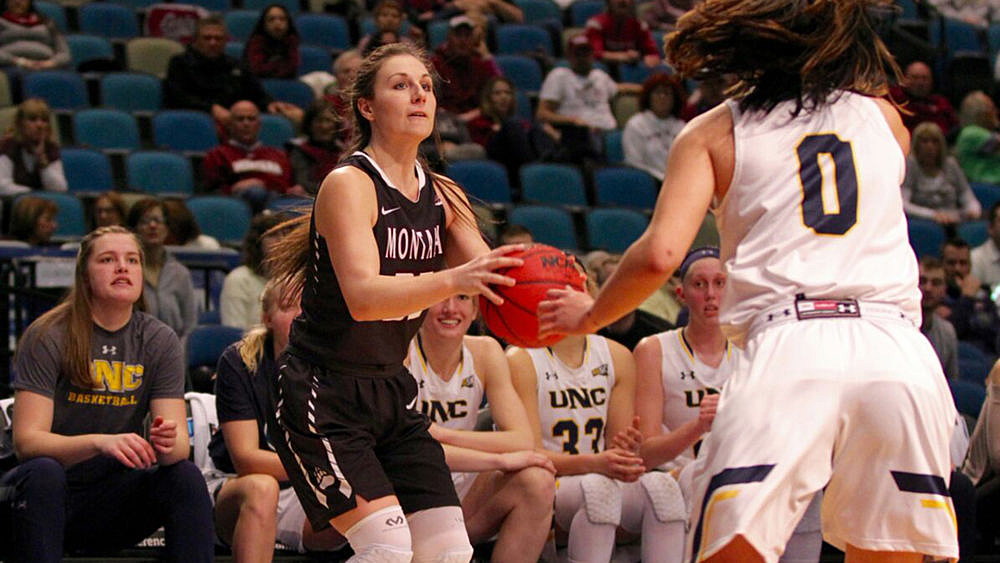 In the end, it was simple math more than anything else that ended Montana’s season on Wednesday afternoon at the Reno Events Center in the quarterfinals of the Big Sky Conference tournament.

Northern Colorado, the tournament’s No. 1 seed, scored its first 27 points from the 3-point line and connected on a dozen from the arc overall to win 78-69 over the No. 8 Lady Griz and move on to Friday’s semifinals.

Montana (14-17) made more baskets in the game, dominating the paint. Northern Colorado’s makes just had more value, threes adding up a lot more quickly than twos.

“Unfortunately we got off to a rough start,” said UM coach Shannon Schweyen. “They were hitting threes on us left and right, against man and zone.”

And that deficit would have been too much for most teams, but Montana, as it’s done all season, kept after it.

The Lady Griz clawed their way back to within seven twice in the fourth quarter, the first time with more than five minutes remaining, but those early threes and Northern Colorado’s 16-for-18 effort from the free throw line in the second half were too much. Time eventually ran out.

“This is a group that has had some of the most amazing comebacks I’ve ever been around,” said Schweyen. “They never say die, they never quit, so I could never count this crew out.

“Sure enough, they found ways. Even though we struggled offensively, we found ways to get back into it and make a game of it.”

McKenzie Johnston scored 15 second-half points and finished with 23 for the game, giving her 51 on Montana’s two-game stay in Reno. Caitlin Lonergan added 18 points and nine rebounds off the bench, matching the 18 points she scored on Monday in Montana’s first-round victory over Sacramento State.

And Jace Henderson added 11 points and nine rebounds in 34 minutes, eight days after suffering an ankle injury that kept her out of the team’s final two regular-season games and limited her to six minutes on Monday.

“Adrenaline helps. It was good enough,” said Henderson. “I just like being out there, being able to contribute any way I can. I felt like I could do what we needed today.”

Schweyen started Henderson, and it was a bit of gamble on the coach’s part. It required the Lady Griz, in order to protect her, to play some zone, which limited the amount of court Henderson would need to defend.

It also placed a lot of hope that Northern Colorado wouldn’t come out scorching the nets from distance.

Instead the Bears, who do a masterful job of moving without the ball and finding open areas to spot up, hit three triples in the opening two minutes and never stopped looking for shots from the arc.

Northern Colorado went 7 for 13 from 3-point range in the first quarter and didn’t hit a shot from inside the arc until Tiarna Clarke’s driving layup at the 8:36 mark of the second quarter made it 29-16.

“I thought we’d take a look at zone with Jace’s ankle,” said Schweyen. “I thought it would be a way for her to ease into the game and not immediately have to be out on the perimeter closing people out.

“A little bit of that is you hope they’re going to miss some shots. Unfortunately they made them.”

Even with Northern Colorado’s first-half shooting, Montana was able to cling to the lifeline of its size advantage inside.

The Lady Griz used an 8-0 run midway through the second quarter, six of those points coming in the paint, to pull to within six, 31-25, but the Bears’ guards were too much for Montana’s depleted roster of perimeter players to keep up with.

Savannah Smith, the Big Sky MVP who would finish with 21 points, and Savannah Scott scored nine of the Bears’ final 12 points before the half to extend their advantage at the break to 16 points.

It highlighted Montana’s latest personnel setback. Nora Klick was injured in Monday’s win and wasn’t available to play on Wednesday. That left Schweyen with a bench of one, Sierra Anderson, to give a break to her perimeter players.

“Right before half they made a big run, so we went into half being down a little bit more than we would have liked,” said Schweyen.

“It hurt us not having Nora. We were down to one perimeter sub, and that certainly is a factor when you’re guarding a team like this. You need to have fresh legs. You need to have some people who can sub in and give you a break. I think that caught up with us.”

Montana is the Big Sky’s worst shooting team from 3-point range, which doesn’t fit its reputation as a team you can never turn your back on or count out.

Instead the Lady Griz are grinders, a group that refuses to ever give in, no matter the outlook or deficit, a trait that never fails to choke up Schweyen.

And it doesn’t hurt that Montana has created an imposing interior presence with Henderson and the continued emergence of Lonergan — remember, her first collegiate game was a little more than two months ago — who played effectively together for long stretches of the second half.

Every time Northern Colorado threatened to pull away in the second half, Montana fought back. It never felt like the Bears were in trouble, but that wasn’t the point.

“I don’t know what it is about this group. They always believe they can get it done,” said Schweyen. “No deficit ever seems to be too much.

“The whole second half of conference, one by one (we had players keep) going down. It felt like we were bringing a knife to a gun fight. That was the slogan that fit this team. And somehow, someway these guys managed to fight their way out of it all the time.”

Montana would outscore Northern Colorado 42-35 in the second half, 18 of those points coming in the paint. And that’s deceptively low. The Lady Griz also went 16 for 19 from the line — Lonergan alone went 10 for 12 — a result of getting the ball to their bigs.

“Jace and Caitlin give us two big post players who are tough to handle for people,” said Schweyen. “They work well together and complement each other well. They were dominant in there today, and we needed to hurt them in the paint.”

After Taylor Goligoski made her only shot of the game, a 3-pointer with 6:36 left, Johnston added a basket inside to make it 68-61.

But Scott got to the line, where she hit one of two, then hit the backbreaker, a 3-pointer (what else?) with 4:44 left that pushed the lead back to 11. Two more UNC free throws with 3:09 left extended the lead to 74-61 and effectively put an end to any possible Montana comeback.

It also put an end to Montana’s season, one that began in October with so much promise but again was defined by injury and thoughts of what might have been. Kayleigh Valley and Alycia Harris, then Goligoski early on, then Stiles and Henderson late. And Klick on Wednesday for good measure.

And yet Montana won 14 games, double its total of a year ago. The Lady Griz went .500 in the Big Sky, at 9-9, and did one better in Reno than last season, advancing to the quarterfinals of the tournament.

“For us to do what we did this season, I’m incredibly proud,” said Schweyen. “We are still extremely young in the big picture, so it’s very promising what this group was able to do. I hope they’re proud of what they did.”

Montana loses just one senior who played this year, giving hope to the season ahead. The sting of the end of this campaign is still fresh and will be for a while, but when it wears off, know this: the future is cover-your-eyes bright.

“You don’t get 15 girls who support each other like this team does. You look to your left and to your right, and you’re always going to find somebody that’s there for you,” said Henderson, who will be one of two seniors next year, along with Anderson.

“The culture we’ve built is pretty incredible. That’s something that’s going to be pretty scary in the future. I’m excited for it.”