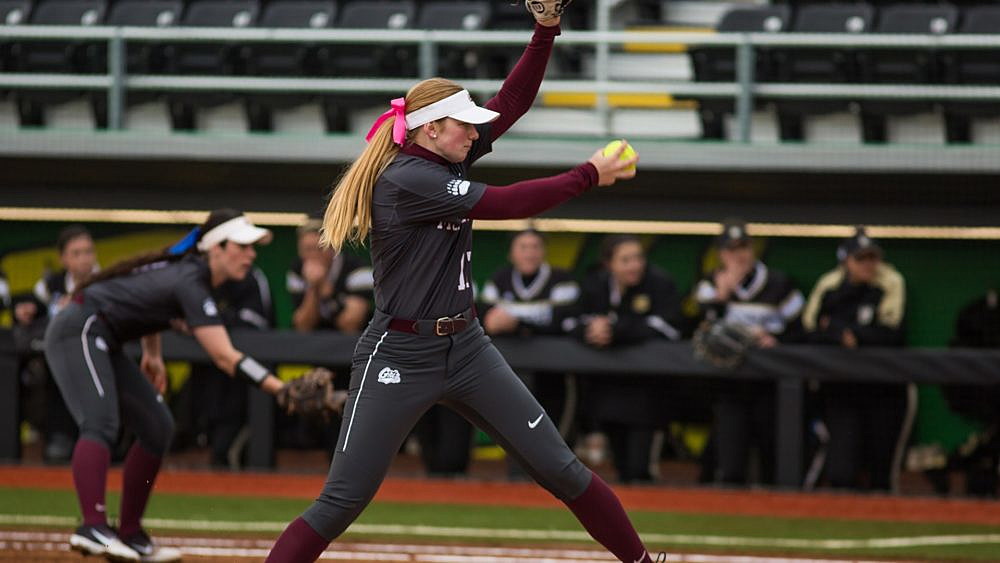 Montana sophomore Michaela Hood‘s dominating performance over the weekend against Idaho State has resulted in her third career Big Sky Conference Pitcher of the Week award.

Hood was recognized on Monday, along with Weber State sophomore Ashlyn Visser, who drove in 10 runs and scored five times in the Wildcats’ series win at Southern Utah.

Hood started the first and third games of Montana’s series at Idaho State and went 2-0 with a pair of complete games. She allowed just eight hits and two earned runs in 14 innings while striking out 17.

She gave up her second hit of the game in the seventh, plus a walk, and the Bengals had runners at second and third with two outs, but Hood came through with a strikeout for her seventh career shutout.

Hood struck out a season-high 10 batters in Sunday’s finale — the fifth time she has recorded 10 or more in her career — and took a shutout into the seventh before Idaho State strung three hits together.

The Bengals pulled to within 4-2, but that’s as close as they’d get. With the potential tying run at the plate, Hood got a ground out and fly out to end the game, her fourth consecutive win.

It was Montana’s first series road sweep since going 3-0 at North Dakota in 2016 and upped the Grizzlies’ winning streak to eight, matching the program record for consecutive wins.

Hood, first-team All-Big Sky last spring as a freshman, is now 6-6 on the season while cutting her ERA to 2.84, the fifth-best mark in the league.

Since falling to 2-6 after taking a loss against Oregon on March 11, Hood has won four straight starts, all complete games.

In 30 innings in those four starts, Hood has allowed four runs and has 13 more strikeouts (31) than hits allowed (18).

Hood becomes Montana’s third player recognized by the Big Sky Conference this season. Delene Colburn and MaKenna McGill both were named Player of the Week earlier in the season.

Montana sits alone atop the Big Sky standings at 3-0 with one of seven weekends of league series complete.

The Grizzlies play a three-game set at North Dakota this week, with a doubleheader on Friday and a single game on Saturday.