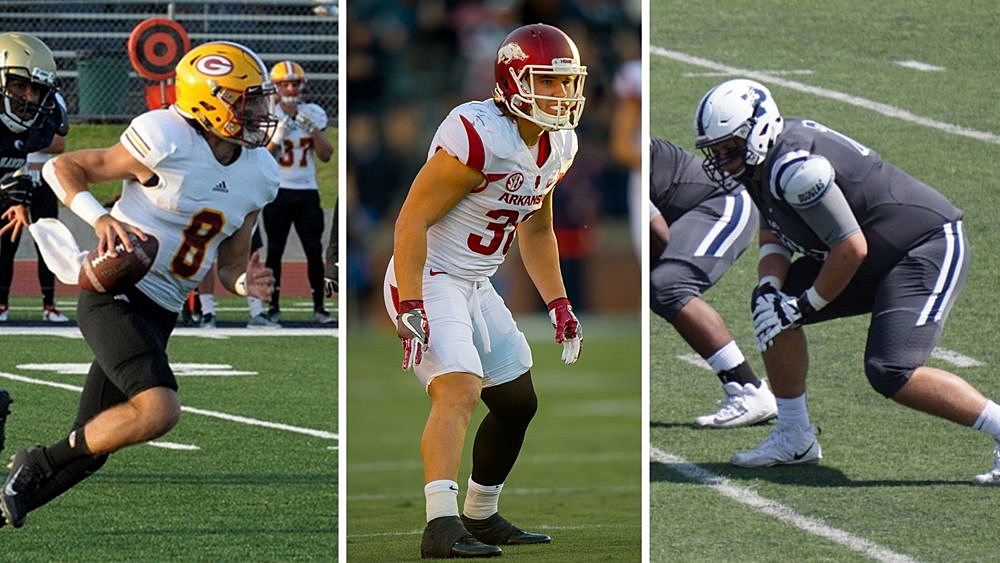 Miller’s journeyman career brings him to Missoula after three seasons at Arkansas where he made a name for himself as a workhorse on special teams and in the weight room.

The West-Central Pennsylvania native also played high school football at the IMG Academy in Florida before suiting up for the Razorbacks, where he saw time as a true freshman. The 5-foot-10, 202-pound DB appeared in 37 games during his time in Fayetteville, racking up 20 tackles and recovering a fumble.

“Reid is a physical player who loves to play the game, and certainly with our secondary being as young as it is, he’ll be a great addition as we look to shore up those ranks,” said Hauck. “The expectation is that he’ll come in and compete right away.”

Miller arrived in Missoula earlier this week, not long after coming to UM for the first time on an official visit. A self-described outdoorsman who is handy with a fishing rod, he will join the team for summer workouts and begin taking classes later this month as he works toward his MBA.

“Missoula just felt like home when I came here on my visit,” said Miller. “When I got off the plane, I loved the beautiful scenery and getting a chance to play for such a historic program is really nice to have.”

With three years in the SEC behind him, Montana will look to Miller’s experience on college football’s biggest stages to guide a young group in the defensive backfield.

“Maturity and leadership – Coach Hauck mentioned to me that they need a guy who is a little older and has been there and done that, so I’m just looking to help the team any way I can. Starting is my main goal, but anything Coach asks me to do, I’ll do,” said Miller.

Humphrey, a 6-foot-2, 190 pond signal-caller from Issaquah, Wash., made his first trip to Missoula the same week as Miller and got the same feeling when he stepped off the plane at Johnson-Bell Field.

“The tradition of winning and the town of Missoula itself, I was nothing but excited. Going into my visit I was hoping it would feel like home, and right when I got there that is how it felt,” says Humphrey.

Humphrey comes to Montana from Saddleback Junior College in Southern California where he passed for 2,187 yards and 19 touchdowns as a redshirt-freshman in 2017, earning first-team all-conference honors and an SCFA Player of the Week nod as well.

“We evaluated him on our own among a pool of guys who were interested in joining our team, and Cam was the player everyone had ranked number one. So, it’s nice to get your number one choice. He’s going to come in and provide competition and depth if not be the starter right away,” said Hauck.

“He’s got a good arm, he’s got a good feel for the game, he runs well, and he’s very accurate. All those things add up to a guy that has a chance to be a good quarterback.”

At Saddleback, Humphrey received looks from FBS programs like Arizona, Arizona State, and Colorado State, but was told he’d have to develop for another season at the junior college ranks.

But when Hauck and the Griz came calling, he jumped at the opportunity to go to Missoula to compete at the D-I level. He’ll enter a competition at QB with junior Dalton Sneed, who impressed the Montana coaches during the spring season.

“As a player nowadays, all you can ask for is a fair competition. Coach Hauck made it clear that all we’re trying to do is get a level of competition to make us better, and that’s all I’m looking for,” says Humphrey.

“I’m really excited to get out there, start competing, get better and help the team get better. That’s how I work, and how I operate, and whoever gets put on the field for the first snap is a decision by the coaches that will make the team better.”

Kanouse first came on Montana’s radar back in 2016 when O-Line coach Chad Germer tried to recruit him out of Peninsula High School in Gig Harbor, Wash.

As a mountainous three-star O-Line prospect standing at 6-foot-6 and tipping the scales at 306 pounds, Kanouse was a hot commodity his senior season, receiving interest from Montana, Hawaii, Idaho, and Washington State, amongst others. He even took a visit to Missoula to test the waters.

“When I was in Missoula last year everyone was super hospitable. The people in the town, the staff, the hospitality was just wonderful and amazing,” says Kanouse. “Montana is beautiful. Being from Washington, we have a lot of the same forests and mountains, and I feel like Missoula has that. It felt like home.”

But instead of coming to Missoula or taking up his other offers, he chose to pursue both football and service to his country by committing to the United States Air Force Academy, where he spent the 2017 season playing at the AFA’s Prep School.

His recruiting journey now comes full circle as he prepares to finally join the Griz in the fall of 2018.

“My personal opinion is you can never have enough O-linemen, and Cody is a great addition to that group. He spent the last year at the Air Force Academy Prep School, so he’s a year older than the rest of the freshmen, so we’ll treat him more like a redshirt-freshmen or sophomore coming in the door,” said Hauck.

“He’s a guy we were all well aware of in high school, and he chose to attend the Academy, which we admire. When he decided it wasn’t what he wanted to do in the future, we were certainly glad to convince him to come to Montana.”

Kanouse says he didn’t need a lot of convincing to choose UM after a recent call with Hauck, where he says he formed a fast bond with the Grizzly mentor.

“He said he was a Pacific Northwest guy, and immediately we had a connection,” said Kanouse. “I think we talked about the best fishing places in Washington for a solid five minutes. It was a really good conversation. I could hear the enthusiasm and excitement on their side, and it just felt good.”

Adding icing to the cake for Kanouse is the new Washington-Grizzly Champions Center – yet unfinished when he took his official visit in 2016. Now he will have full use of one of the most advanced training facilities in all of FCS football.

“I toured the campus before the new facility went in, so I haven’t even seen all the new shiny things. I had a good feel for it before, and now I’m even more excited to come into the program and be part of the culture.,” Kanouse says.