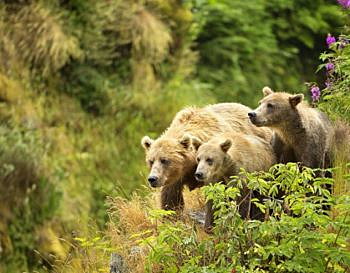 When Will Deacy left Missoula for Alaska’s Kodiak Island in 2014, the doctoral candidate at the University of Montana was in for a surprise.

Deacy had traveled north to study the island’s unique subspecies of grizzly bears, watching as they moved from stream to stream gorging on salmon as the fish came in. But when he got there at the height of the spawning run, there wasn’t a bear in sight.

And it happened again the next year.

“Prior to that summer, we found streams littered with thousands of shredded salmon carcasses,” Deacy said. “But in 2014 and again the next year, we were stunned to find such a strikingly different scene. There were piles of rotting, intact carcasses that had died after spawning instead of being killed by bears.”

Working under the mentorship of Jack Stanford, the former director of UM’s Flathead Lake Biological Station, Deacy and his fellow researchers realized that climate change had caused another bear food – red elderberries – to ripen earlier than usual.

That had prompted the bears to abandon spawning salmon.

The resulting study, published in the Proceedings of the National Academy of Sciences, suggests the switch in food sources will change the ecosystem on Kodiak Island.

“It’s a strange, indirect effect of climate change,” Deacy said. “These bears eat dozens of different foods throughout the year, but now two of them are overlapping. This is causing a disruption in the food web that could have profound implications for the ecology of the island.”

In a typical year, Deacy said, the bears eat spawning salmon in small streams during mid-summer, followed by berries in late summer. Come fall, they switch back to catching salmon.

The system is spread out over the season, providing bears with a continuous supply of quality foods. But when their food sources overlap, Deacy said, they must choose which to eat and which to skip. And with warming temperatures, the berries are ripening early.

“An earlier berry crop shut down one of the most iconic predator-prey scenes in nature,” said Jonny Armstrong, an ecologist at Oregon State University and a member of the research team.

“As climate change reschedules ecosystems, species that were once separated in time are now getting a chance to interact – in this case the berries, bears and salmon. This is going to have large impacts that are hard to predict.”

Among the impacts: Birds that depend on bears pulling salmon out of the stream could be seriously affected, Armstrong said. Changes in streamside vegetation, evolving salmon populations and impacts on plant pollinators may also occur.

Stanford, who now serves as director emeritus at the Biological Station, said the abundance of salmon and berries on Kodiak Island is why the bears as so large and so great in number. The overlapping food sources could have long-term impacts.

“This overlap in their resources forces the bears to make a choice that could, in the long run, result in fewer bears and unexpected changes in ecosystem structure,” Stanford said.